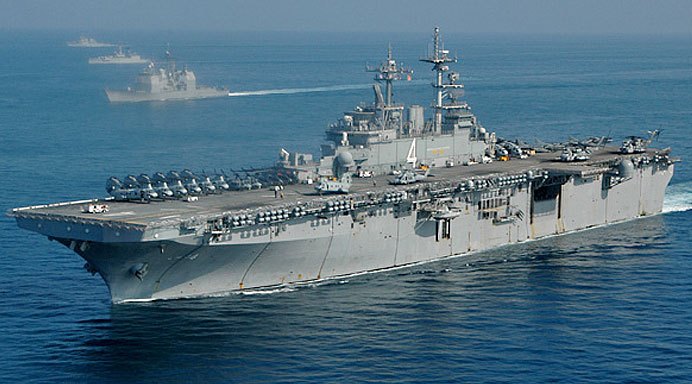 Starbucks On A Warship? USS Boxer Gets It's Own Coffee Shop[/caption]Starbucks opens on USS Boxer

The USS Boxer has become the first amphibious assault ship in the U.S. Navy to open and operate a Starbucks coffee shop onboard for its crew whilst on deployment.

The coffee shop will be staffed by members of the USS Boxer's crew who have been trained by Starbucks employees to operate the machines given to the warship by the company; after opening whilst still at its home port of San Diego the Boxer's coffee shop now offers a full range of Starbucks products.

Lt. Cmdr Leon Quarles was responsible for forming the program, which includes partners such as Starbucks and the Naval Exchange Command Ship Store Program.

“I worked with Starbucks representatives and several contractors to put this all together,” said Lt. Cmdr. Leon Quarles. “We took the basics of Starbucks marketing and applied those principles to the ship.”

"I'm excited I was picked to work here," said Logistics Specialist Seaman Thomas Rios, a Starboxer barista, according to the release. "I think people will be more energized in the morning and look forward to going to the store before work."

Members of the Boxer's crew have been chosen to work in the coffee shop in an attempt to keep morale high amongst crew members when the ship is on deployment and the crew often become homesick; all profits will be used to fund the USS Boxer's Morale, Welfare and Recreation Fund.

According to the Huffington Post, the new coffee shop is not Starbucks' first tour of duty. Starbucks coffee has been served at the USS Carl Vinson's onboard eatery, Chuckie's Cafe, since at least late December of 2011. USA Today has a video featuring it and several sailors, who describe Starbucks coffee as "something to look forward to every day" and "a little bit of home."

In 2009, the Canadian Forces put a call out for a company to supply Tim Horton's coffee to the Halifax port, who would redistribute the coffee to sailors stationed on land and on water around the world.

Jeri Grychowski, a spokeswoman for Canada's Atlantic fleet, said at the time, the navy has spent $405,000 on Tim Hortons coffee over the last three years.

"There shall be no acceptable substitute," according to the tender issued by the Canadian Forces earlier this month. "Tim Hortons has been determined by MARLANT" — the navy's Maritime Forces Atlantic command — "as the product of choice based on expressed customer taste and preferences for boosting morale in Afghanistan, Sudan and Sierra Leone."

Tim Horton's is more than just a great cup of coffee -- it's a Canadian icon!

Canadian Navy says there is "no acceptable substitute" for Tim Horton's coffee
http://www.wired.ca/canadian-navy-says-there-is-no-acceptable-substitute-for-tim-hortons-coffee-029980.php

Related Topics:coffeeStarbuckstim hortons
Up Next

Golfer Bitten By Black Widow Spider, Sucks It Up And Finishes Round