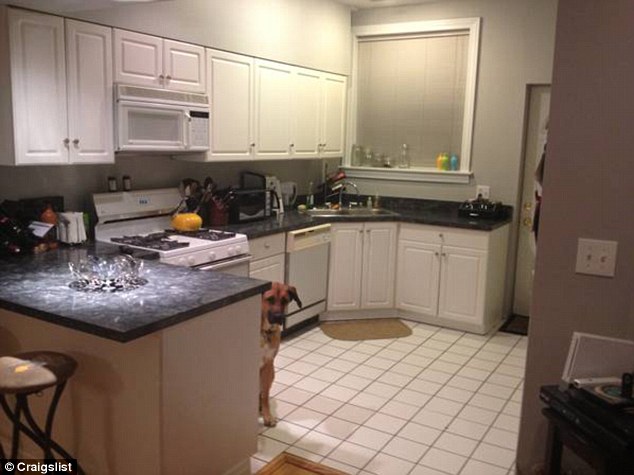 Chicago, IL - Landlord John Kanive put up an ad to rent out his apartment on Craigslist. The ad display six photographs of the apartment to display the various rooms. What is unique about the ad is that his dog Otis photobombed every photograph.

the two-bedroom apartment’s ad on the popular website turns into a veritable game of “Where’s Waldo,” or, in this case, “Where’s Otis.”

Otis, a lovable 90 lb. mix of Great Dane & German Shepard, apparently tracks his owner like the moon tracks the Earth. The first photograph was of the apartment living room and had young 3-year-old Otis resting by the coffee table.

The second photograph was of the kitchen and had Otis sitting slightly behind the kitchen counter.

The dining room photograph shows Otis in the far right corner of the dining room table. The master bedroom has Otis opposite the master bed peering just over the bed's comforter. The living room shot has Otis peering from just around the corner.

The second bedroom photograph again shows Otis on the opposite side of the bed. The apartment rented out within the first 24 hours of being posted on Craigslist; his owner credits quick rental to the warmth and pet-friendly nature of the apartment which Otis aptly demonstrated. The owner's conclusion is not merely conjecture.

The ad, describing the apartment’s “open layout” and “tall ceilings,” was your standard, run-of-the-mill posting had it not been for Otis photobombing each shot.

“The first picture I took, of the living room, he was just laying on the floor,” Kanive told ABCNews.com. “So when I saw that picture, that’s when I got the idea to place him in all the pictures.”

Kanive said that nearly every respondent to the ad made some mention of Otis.

And just incase you wondering, the Apartment was quickly rented out.

“It did create a lot of traffic to our ad,” he said