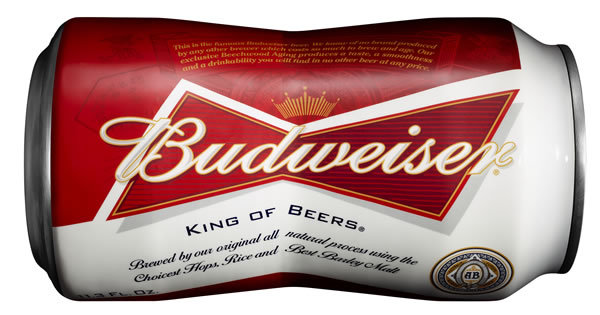 Package designers at beer giant Anheuser-Busch have been laboring since 2010 on the design of a new can for its popular Budweiser brew.

Now officials at the St. Louis-based company have announced that on May 6, its new Budweiser bowtie can will be officially released. The new can, which is symbolic of Budweiser's longtime bowtie logo, will not replace the regularly shaped beer can but will be offered as something new and different.

A company spokesperson calls the new design incomparable, unique and innovative. The aluminum container, which will be manufactured for the company in New York State, features a sloping angle at the top and bottom of the can which meets in the middle and resembles the shape of a bowtie when held in a vertical position.

"This can is incomparable, like nothing you've ever seen before," said Pat McGauley, vice president of innovation for Anheuser-Busch, in a press release. "The world's most iconic beer brand deserves the world's most unique and innovative can. I think we have it here."

Budweiser fans, however, have already noticed that the new Budweiser bowtie can will hold less beer than a regular can, 11.3 ounces rather than the traditional 12 ounces.

The amount of beer in the bowtie can represents a caloric decrease of almost 9 calories versus Budweiser's current packaging.

The new bowtie cans will be packaged in quantities of eight cans rather than six which the company hopes will draw attention to it on store liquor displays.

The proprietary bow tie-shaped can, in development since 2010, will be available only in the United States and in an 8-pack. It will not replace the traditional Budweiser can.[/caption] The new bow tie-shaped can will be available nationwide in an 8-pack.[/caption] The proprietary bow tie-shaped can, in development since 2010, will be available only in the United States and in an 8-pack. It will not replace the traditional Budweiser can.[/caption]