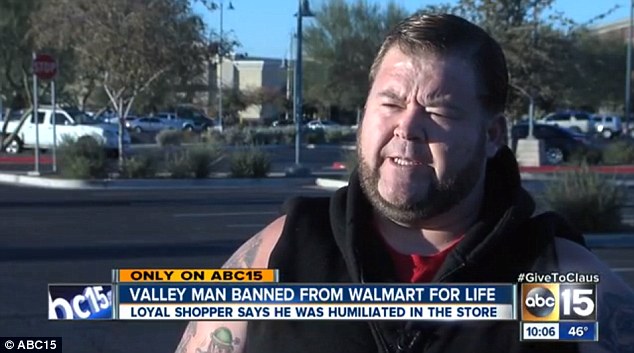 San Tan Valley, AZ - A former professional wrestler and now disabled man will no longer be able to enjoy his favorite haunt: ad matching at Wal-Mart. It may be that Joe Cantrell was too good at finding deals which the retail giant was compelled to price match. He found his bargains by ad camping at local stores and then comparing prices at Wal-Mart.

Cantrell’s troubles started when a Wal-Mart employee told him the store would no longer allow him to price match. He returned four days later to do his usual routine, but was met by police deputies who handcuffed him in front of store patrons and escorted him out of the store. In an ironic twist, the police officers released him, but have since filed charges that he engaged in disorderly conduct and threatened & intimidated a Wal-Mart employee. Cantrell denies making any remark to the employee much less one which was criminal.

Wal-Mart has issued a statement standing behind the employee. They have also banned Mr. Cantrell for life from the store. It is not clear just how the world's largest retailer will enforce that lifetime ban. The question is also whether the ban applies to just this store or all of them. Banned: This is the notice Mr Cantrell received telling him he is banned from all Walmart stores worldwide
[/caption]

Disabled former pro wrestler claims he was handcuffed and banned from Walmart for life for trying to price match
http://www.dailymail.co.uk/news/article-2521568/Disabled-man-banned-Walmart-life-trying-price-match.html

Related Topics:man banned from walmart
Up Next