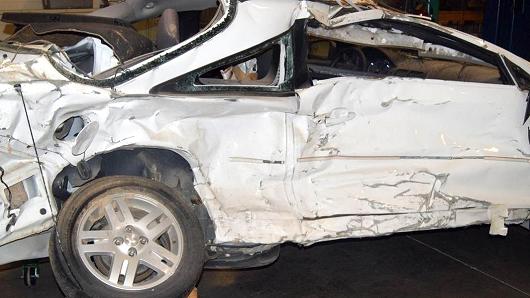 Brooke Melton's parents continue to feel outraged that their 29-year-old daughter succumbed to injuries she suffered in a faulty GM car on her birthday in 2009. Mom Beth and dad Ken Melton characterize their daily emotional state as one of chronic grief ever since they received a call from police that their daughter's car had spun out of control and been hit in an accident. The Meltons contend their daughter's car manufacturer, General Motors, had known for years that cars such as the Chevy Cobalt contained a faulty part that GM made no effort to correct.

"When I saw my daughter in the emergency room and I kissed her cold forehead, I said, I will vindicate this. I will vindicate your death. And I will try to save as many lives as I can," said her father, Ken Melton.

Officials at General Motors are now admitting they were aware of an ignition switch problem as early as 2001 but did not issue a recall of cars until February of 2014. Kelly Ruddy was killed in 2010 while driving this 2005 Chevy Cobalt, one of the models and years involved in a 1.6-million-car recall because of faulty ignition switches.
[/caption]

When Brooke Melton's parents filed a wrongful death lawsuit against GM, they discovered to their horror that the company had fully been aware of a solution to the faulty ignition problem but made a decision not to tell customers about it or to issue any recall for the more than one million of their vehicles that endangered drivers because of this flaw.

Testimony during the case also revealed that GM made incremental changes to a part inside the ignition switch starting in 2005. It did so without telling consumers.

“I’m still in shock and boiling over with anger,” said her husband Ken. “Anger that again they would sweep something under the run knowingly have the information even in their records.”

The Meltons have now settled with GM for an undisclosed sum. Their suit against a local dealership is ongoing. Pediatric nurse Brooke Melton, 29, died in this 2005 Chevy Cobalt on March 10, 2010, when the ignition allegedly shut off as she drove down a highway on a rainy night in Georgia. She then lost control of the vehicle and was hit on the passenger side by an oncoming vehicle.
[/caption]