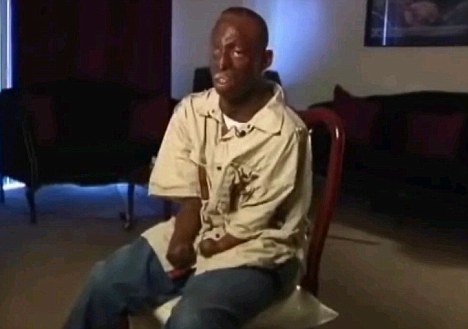 Six Flags Bans Man With No Hands From Roller Coaster

Michael Green waited patiently in line to ride one of the roller coasters at the Six Flags Over Texas amusement park, only to be told he could not board the ride because he has no hands.

Green, who lost his hands in an accident when he was still an infant, was very distressed that park staff members refused to allow him to enjoy the roller coaster as he has done previously during many visits to the popular theme park in Arlington, Texas.

Employees adamantly refused to allow Green roller coast entry, most likely a reaction to the death of an amputee last year in a fall from a roller coaster at a New York State theme park.

Green said he felt terrible after being banned from riding the coaster, saying he felt discriminated against and that Six Flags was treating him like an outsider rather than as a frequent loyal customer.

Speaking to 9news.com, Mr Green said: 'I always get stared at a lot, but I never get discriminated, people telling me that I can't do something when they don't even know what I can do,' he said.

Mr Green said: 'I thought I was normal, and then I get treated like I am not, like I'm an outsider again - and that's the worst feeling in the world, to feel like an outsider,' he said.

A spokesman for Six Flags Over Texas said each ride has s specific set of policies in place to ensure the safety of riders.

He added: 'Our policies and procedures are reviewed and adjusted from time to time to ensure we continue to accommodate the needs of our guests while simultaneously maintaining a safe environment.'

Clint Bench who was born without hands due to a congenital deformity, was also banned from a Six Flags park, now he's suing, according to the Dallas News.

Last year while visiting Six Flags in Arlington, Texas, an employee refused to allow him to ride an attraction called the Aquaman Splashdown. Bench was apparently in violation of a new policy that said he "must have at least one fully formed arm all the way down to the fingers," The Dallas Observer reports.

"This caused Mr. Bench considerable embarrassment, as his children had never seen anybody discriminate against him due to his lack of natural hands,” according to Bench’s lawsuit, which rather than money, seeks only to ensure “that this doesn’t happen again,” he told CBS Dallas.

Six Flags declined to comment to CBS Dallas because the lawsuit is ongoing.

Disabled man with no hands left furious after Texas theme park bans him from its roller coasters
http://www.dailymail.co.uk/news/article-2158597/Disabled-man-hands-left-furious-Six-Flags-Over-Texas-theme-park-bans-roller-coasters.html