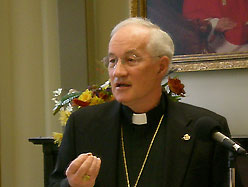 who will be the next pope

Just a few hours after Pope Benedict XVI made a surprise announcement with regard to his planned resignation from the Holy See in late February, a list of likely candidates to assume leadership of the Roman Catholic faith around the world dominated international news headlines. Among those names being extra-officially considered in the running, Cardinal Marc Ouellet of Canada stands out as a strong contender to the honorific title of His Holiness.

The former Cardinal Joseph Ratzinger cited declining health as the reason for his sudden decision to vacate his post as Pontifex Maximus. He is a couple of months shy of his 86th birthday and has served as the highest Vicar of the Roman Catholic Church since his papacy began on April 19th, 2005. He cited a general lack of strength and body when he addressed his Cardinals and mentioned that his decision came after a careful examination of conscience before God.

Bookmakers in Britain and Europe are already accepting wagers on the likelihood of Cardinal Marc Ouellet becoming the next Servant of Servants of God in the Vatican. He is ahead of two African Cardinals, Peter Turkson of Ghana and Francis Arinze of Nigeria. Cardinal Turkson is the youngest runner-up at 62 years of age and Cardinal Arinze is the oldest at 80.

“The Canadian in me would be terribly proud if the first pope elected from outside Western Europe in 1,000 years was Canadian,” said Father Jacques Monet, a Jesuit priest based in Montreal, who is an archivist, historian and director of the Canadian Institute of Jesuit Studies. “People say that it’s time to have a pope from outside Western Europe. Is it time for an African? Is it time for a Latin American? I suspect those parts of the world might come before North America.”

Bellitto doubts the Vatican would make such a leap.

“The church moves glacially,” he said. “We shouldn’t expect too much too soon.”

His Eminence Marc Ouelette is 68 years old and rose to Cardinal from his previous post as archbishop of Quebec in 2003. He is the Prefect of the Congregation for Bishops and the President of the Pontifical Commission for Latin America and speaks English, French, German, Italian, Portuguese, and Spanish.

Pope Benedict XVI hold Cardinal Ouellet in high regard due to this leadership in the Latin American region, a stronghold for the Roman Catholic faith, although the consideration of African Cardinals is welcome since the world's major religions see the plateau continent as a vibrant region for the church.

“Cardinal Ouellet is a man who has beautiful spiritual qualities,” Archbishop of Quebec, Gérald Cyprien Lacroix, said. “He’s a man with deep spiritual convictions and that is certainly very, very important. He’s [also] a man who knows very well the church and he speaks many languages” having worked in Colombia and other parts of South America and across Canada, he said.

Who do you think will be the next pope?