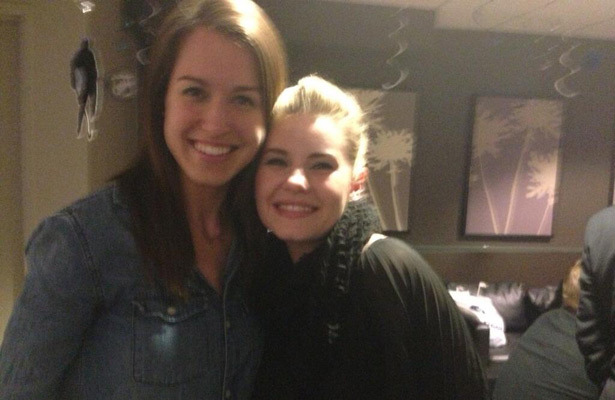 It looked like the makings of an epic hockey fight when Elisha Cuthbert turned to a fellow hockey wife and apparently rolled her eyes at the woman.

The "Happy Endings" actress had been attending a Toronto Maple Leafs playoff game at the Air Canada Centre in Toronto, when she had been photographed rolling her eyes in the direction of April Reimer, the wife of Toronto goalie James Reimer. Reimer had just let the game-winning goal slip passed him in overtime, losing the game for Toronto.

Cuthbert has been engaged to Leafs' captain Dion Phaneuf since September, and has attended several games to support not only her fiance, but her fiance's team. This is the first time that the Toronto Maple Leafs have been in the playoffs since 2004.

The goal itself was not bad, but the play by Phaneuf leading to the goal had been.

The eyeroll had not gone unnoticed, and Reimer shot daggers back at Cuthbert.

Both Cuthbert and April Reimer took to the media to explain that they were not rolling their eyes at one another, but rather at the gentleman who had been seated next to them at the game. "Things are not always what they seem. I'm insulted and disappointed by a lot of these Comments. That's real. Not a 3 sec. Clip," Cuthbert tweeted after a video and an animated gif of the two went viral following the game.

"For those who were thinking Elisha and I were rolling our eyes at each other, it was the jerk beside us," Reimer said.

Man Tries To Shoot off Wedding Ring, yes he was drunk