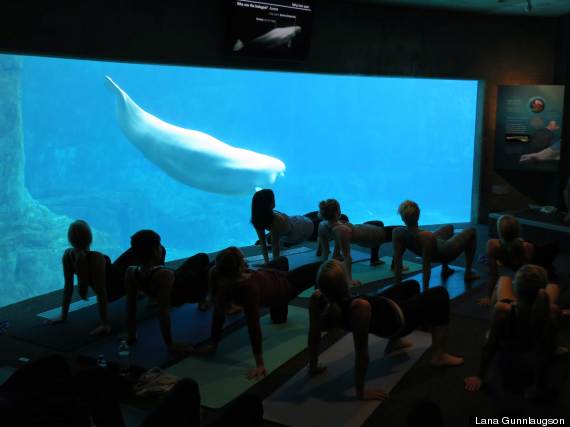 Yoga with the Belugas[/caption]The Vancouver Aquarium's plans to offer area yoga practitioners the chance to practice their art next to two Beluga Whales has drawn the ire of one local yoga instructor.

Corie Kielbiski organized a protest involving almost two dozen individuals outside the Aquarium this week, saying they were upset that the Aquarium was holding whales in captivity and then using yoga as a means to fund raise to further their captive state.

Kielbiski says that Beluga Whales are majestic creatures not meant to be restricted to living in what she called glass boxes and said it was ludicrous for anyone who understood what yoga was all about to think they could enjoy practicing such a peaceful art right next to creatures who are suffering from a loss of freedom.

"It's an oxymoron," protester Cynthia Ganatra told Global News. "Yoga is about liberation and freedom.. It's about the interconnectedness of all beings."

The protesters received no response from the yoga teacher who had organized the yoga practice with whales event, although some individuals who participated in the class said they were curious to talk with the protestors in order to understand why they found the event linking yoga with whales so disturbing. Aquarium officials did not respond directly to the protestors, but issued a formal statement indicating that the Aquarium has hosted three public yoga events.