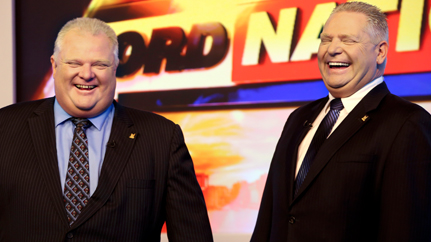 The Sun News Network had its best ratings ever for a single program with episode one of the "Ford Nation" where Ford refers to Rob Ford, the embattled mayor of Toronto. The show was viewed by 155,000 viewers which makes it the single best performance by a program in the new channel's history. However, the network has decided to cancel the program citing high production costs.

Say that again? The "Ford Nation" program did not involve the employment of special sets, pyrotechnics, stunt men, high paid actors, body doubles, computer generated images, or special effects. The network stated that the first episode required five hours of film footage to create followed by eight hours of editing. They did not explain how running cameras for five hours and operating several computers to edit the footage can make a program with 155,000 viewers unprofitable. Again, "Ford Nation" had the highest ratings for any show on their network.

Mayor Rob Ford used the program to defend himself against attacks by his opponents seeking to force his resignation. The mayor has copped a "mea culpa" regarding drug & alcohol abuse, but he remains recalcitrant regarding any disciplinary action that would lead to his removal from office.

Rehabilitated Seal Pups Released Back into Wild at Howe Sound