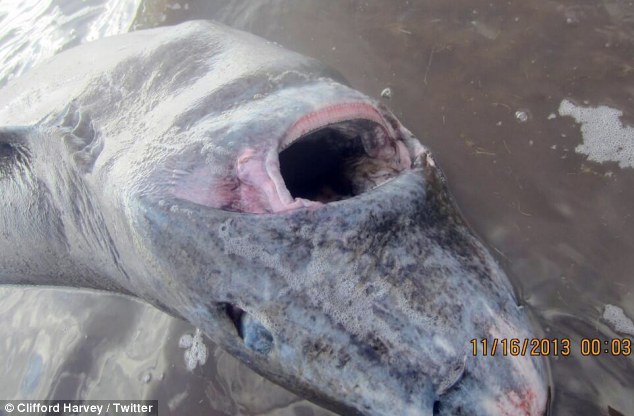 Helping hand: Derrick Chaulk is pictured coming to the shark's aid and pushing it into deeper water
[/caption]

Photographs have emerged which give a more vivid description of the Greenland shark that was found choking on a chunk of moose flesh and fur. Popular descriptions in the media put the incident most succinctly when it is stated that the shark bit off more than it could chew.

How it got a hold of moose flesh is quite a different story, but when Jeremy Ball and Derrick Chaulk came upon the predator, it was washed ashore and choking. Sharks must stay mobile in order to force water into their gills where they extract oxygen. The shark was unable to swallow the mouthful it had lodged in its jaws and it was effectively paralyzed. Death was imminent.

However, both Chaulk and Ball got busy and began tugging at the hunk of moose flesh stuck in the shark until they were able to pull it out. Next, they gave the shark a tow into deeper waters where the rushing water of the waves allowed it to recover sufficient strength to start the swim back to its native habitat. Gasping for air: The 8ft long shark was first thought to be a beached whale when it was found in the harbour
[/caption]

It was just as well as Greenland shark flesh requires a lot of preparation in order to eat. Simply boiling it or frying it will not release the poisonous toxins in the flesh. Big bite: The Greenland shark was found choking to death in a harbour in Norris Arm North, Newfoundland
[/caption]
On The Web:

Xbox One And PS4 Sold Out Across Canada, Amazon.ca Accepting Orders