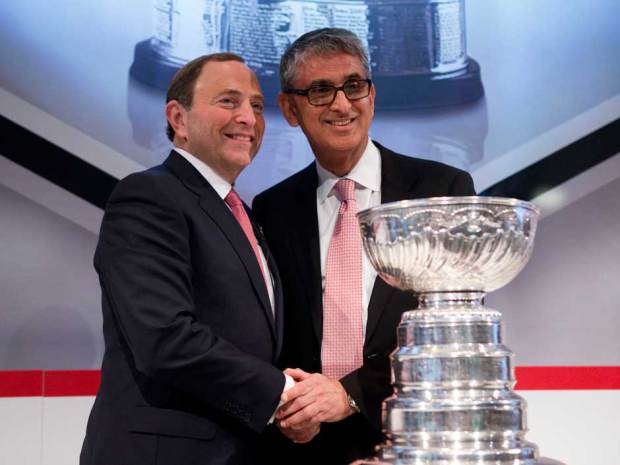 Blockbuster: NHL Commissioner Gary Bettman, left, and Nadir Mohamed, President and CEO of Rogers Communications[/caption]Rogers Communication and the National Hockey League (NHL) have announced a historic deal for Canadian broadcasting rights of all NHL games including the Stanley Cup Playoffs and Finals. The twelve year deal will commence with the 2014-2015 season and end with the 2025-2026 seasons. The deal is worth a reported $5.23B CAD (~$5B USD). The deal gives Rogers Communication the rights to telecast all games in any language and platform.

It should be noted that the deal is not engraved in stone just yet. The NHL's Board of Governors will be reconvening on December 9 and 10 and will take up a discussion of the deal. Their express approval must be obtained in order for the deal to proceed. However, there has been no indication that the deal will encounter opposition. There has never been a sports broadcasting contract of this size before this one.

“The NHL is extremely excited about the power and potential of this groundbreaking partnership,” said NHL Commissioner Gary Bettman in a statement.

“Our fans always want to explore deeper and more emotional connections to NHL hockey, and that is precisely what Rogers has promised to deliver over the next 12 years,” Bettman added.

For fans of hockey, the deal will mean more access to NHL games because Rogers Communication will be allowed to telecast any game of its choosing. This means no more blackouts or regionalization of games. As long as the game involves a Canadian team and is played on a Wednesday, Saturday or Sunday night, Rogers will be broadcasting the game. There is one caveat and that is that "Hockey Night" will continue to air on the CBC network. Likewise, the TVA retains broadcasting rights for French-language multi-media.

Related Topics:featuredNHLRogers Communication
Up Next