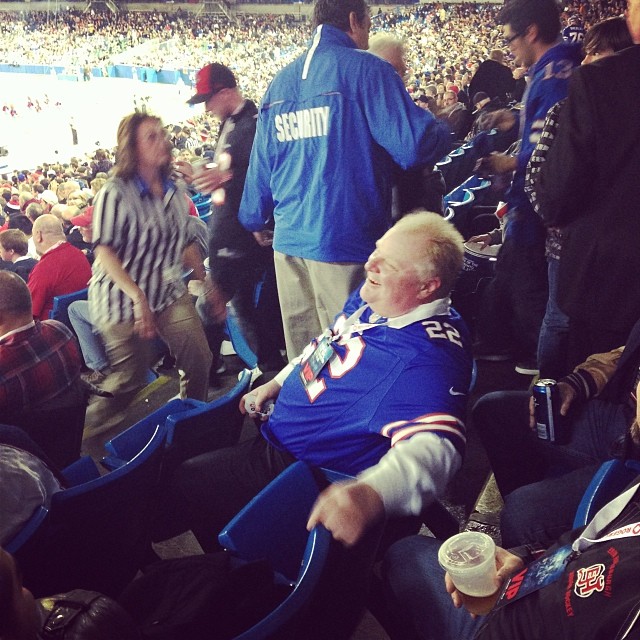 I was raised both watching and playing football. Until December 1, 2013, during the Atlanta Falcons/Buffalo Bills NFL game, I had never seen "stealing" during a football game. No, it was not a new play that went down, but a steal made in the bleachers that I am referring to.
Rob Ford is the Mayor of the great city of Toronto.

The East Coast rocker was placed in an awkward position by Mayor Ford. He wanted to enjoy the game in the seat he had paid good money for, but he did not want to be rude and oust Mayor Ford publicly or disrespectfully. Mays knew he had to do something, but what?

“It was funny. Out of 60,000 seats, he chose mine,” Mays told the Star during the second half of Sunday’s Bills-Atlanta Falcons game.

Sitting next to the Mayor was his personal driver, who held a cellphone and glowered as more and more fans began to take notice.

A Rogers security guard was perched on the arm of a chair facing Ford and keeping a watchful eye on intruders into the mayor’s football office. He waved off many fans, telling them Ford wanted to watch the game.

Mays sent out a tweet explaining the situation and asking for help and opinions.

The public came through for Mays. Less than an hour later, Mays tweeted that he finally got his seat.

Meanwhile, National Post sports columnist Bruce Arthur reminded others via Twitter that Mays had once recorded the song "Cocaine Cowgirl" which appeared on his 2005 album "Matt Mays and El Torpedo."