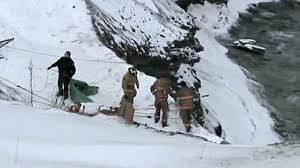 A fifty year old man from Nova Scotia fell close to seventy feet in icy weather on Thursday, December 26, but survived with only minor injuries. John Lusk was walking along an icy embankment with a friend in Glace Bay when he apparently lost his footing on the slick ground and fell to the bottom.

The temperature at the time of the incident was estimated to have been around minus eight degrees Celsius, with the effects of the cold being compounded by the fact that Mr. Lusk was also wet after landing in some water at the bottom of the cliff. Firefighters, anticipating a water rescue, arrived on the scene with a rescue boat, but ended up rappelling down the rocky embankment to reach Mr. Lusk instead. He was then placed in a stretcher and pulled back up the embankment to safety.

Fortunately, Mr. Lusk sustained only some relatively minor facial trauma, as well as some various cuts and bruises across his body, but no serious injuries or broken bones. Rescue workers transported him to the hospital for medical treatment where doctors expect him to make a full recovery from the injuries he sustained during the traumatic fall.

On The Web:
NOVA SCOTIA MAN FALLS OFF CLIFF: CANADIAN LUCKY TO BE ALIVE
http://www.ecanadanow.com/canada/2013/12/28/nova-scotia-man-falls-off-cliff-canadian-lucky-to-be-alive/

Related Topics:Man falls 70 ft.survives
Up Next