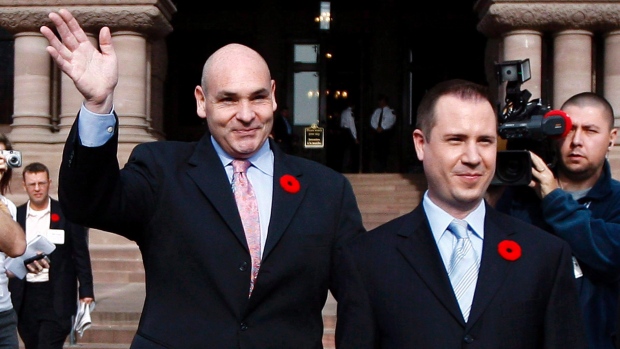 Toronto, Canada - George Smitherman, former Deputy Premier of Alberta, announced that his husband was found dead and without saying the cause of his death directly, it was implicit that it was the result of a suicide. Instead, Smitherman chose to refer to his husband Christopher Peloso's death as finding peace from the darkness and anguish of depression. He went on to say that he will celebrate the life of his 40-year-old partner in life.

Peloso's struggles with depression were well known. It was only this past September that a missing person's report was filed on his behalf after he failed to appear home. He discovered two days later curled up near the fence of a railroad track in a position often invoked by people suffering from deep depression.

Toronto Police just confirmed that my darling Christopher Peloso has been found dead.

We will celebrate his life and we will find comfort somehow in knowing that he has found peace from the depression that has wreaked havoc on his mind.

A son and brother, a husband and father of 3 he will always be remembered for his dedication to others.

We have been greatly aided by the compassion of the Toronto Police service and we will find strength going forward from the legions of people in our extended family who loved him so.

Peloso is survived by his husband and their three children. He was described as being a perfectionist in his profession. As a father, he was said to be loving, patient, and very good with children. Smitherman held his political post until now embattled Toronto Mayor Rob Ford defeated him in the general election back in 2010.