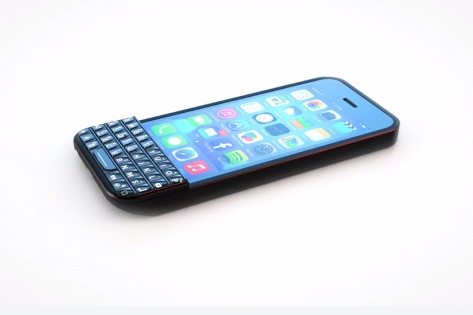 BlackBerry is suing Typo Products (whose keyboard is shown above) for patent infringement. HANDOUT/Typo Products[/caption]Ryan Seacrest's Startup Is Sued By Blackberry over iPhone Keyboard Accessory

The fledging company, which opened for business last month, introduced a keyboard enclosed to a phone case that fits on the iPhone 5 and 5s called Typo Keyboard. The accessory offers consumers an alternative to the touch screen keyboard found on current iPhone models. Presently, Typo Keyboard is only available for pre-order online with a price tag of $99, and official release is expected later this month.

Blackberry wants the budding company to take the keyboard off the market immediately. Blackberry’s general counsel and chief legal counsel, Steve Zipperstein said, “This is a blatant infringement against Blackberry’s iconic keyboard.” He went on to say Blackberry would take all measures necessary to safeguard its intellectual property against any organization that duplicates its unique products and designs.

Ryan Seacrest reportedly invested $1 million in Typo Products. The lawsuit and infringement allegations put the company in a vulnerable position. Erika Gutierrez, a representative for Typo, said in an e-mailed statement, “Although we respect BlackBerry and its intellectual property, we believe that BlackBerry’s claims against Typo lack merit, and we intend to defend the case vigorously.”

Related Topics:Blackberryryan seacrest
Up Next