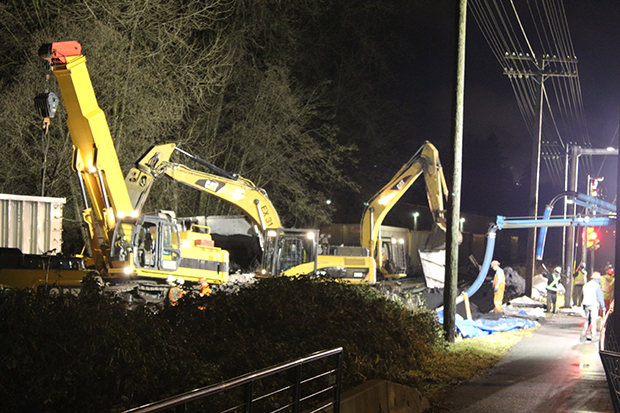 Burnaby, British Columbia - A protected waterway is now the site of a massive load of coal after a Canadian Pacific Railway train jumped its rail. The Royal Canadian Mounted Police (RCMP) confirmed the incident Saturday morning. It is believed that heavy rains may have been the root cause of the crash. Thankfully, no one was injured in the accident.

The train was traveling just north of Burnaby Lake when 7 of its 152 freight cars jumped the tracks at about 11:00AM local time. Three of the cars flipped over dumping their coal which has now seeped into a nearby creek. The environmental damage isn't known yet, but the Ministry of Environment is conducting an impact analysis. At this early time, the exact cause has not been confirmed, but rains are a logical explanation for the cause. The heavy rains aren't subsiding anytime soon either as an additional 50cm or ~2 inches of rain were forecast to fall in Metro Vancouver this weekend.

The creek in question is protected by Fisheries and Oceans Canada due to the delicate ecosystems for fish and wildlife in the area. The accident has given opponents to Canada's growing use of coal the ammunition they needed to thwart the ongoing coal expansion.

On The Web:
Heavy rain may have caused CP train derailment in Burnaby
http://www.vancouversun.com/news/Canadian+Pacific+Railway+train+carrying+coal+derails+Burnaby/9376602/story.html