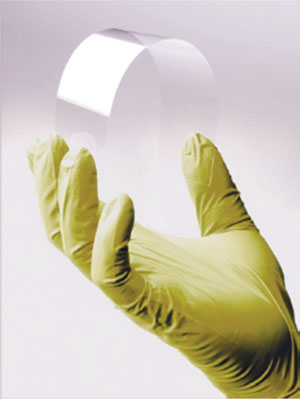 Toronto, Ontario - Canada has taken its place a world innovator in recent years and that pace doesn't look to be slowing down anytime soon. Now, engineers at McGill University claim they have developed the next-generation in glass appropriately called "NextGen" which can be bent without breaking. The research engineers borrowed concepts from the structural durability of seashells to create their improved design.

As per François Barthelat, a mechanical engineer on the design team, a sea shell is made up almost entire of chalk, which anyone knows is anything but flexible and durable. However, the chalk shell is coated with the composite material known as nacre which is what gives the shell its toughness and durability. Nacre is itself iridescent, resilient, and very strong. What Barthelat and others on the team observed is that nacre has weak spots in its microscopic design. It is those weak spots, which he likened unto the connection points of Legos, which the team mimicked in the fragile points of a glass slide with lasers. The resulting glass slide became 200x more durable than it previously had been.

Barthelat believes the process can be applied with relative ease to other sheets of glass such as those with engraved designs or logos. The laser process essentially adds cracks to the glass which are flexible points that can absorb the shock of a drop or hit without altering the structure of the glass IE shattering.

So what comes next? The team wants to see if their new technique can be applied to other substances such as polymers and ceramics. Polymers are form the basis of plastics and are found naturally and artificially in a wide range of places. If successful, a much broader use of the technology would be possible. The full report is in the current issue of Nature Communications.

On The Web:
Glass that will bend but not break
http://www.authintmail.com/article/technology/glass-will-bend-not-break

Related Topics:glass bend not break
Up Next