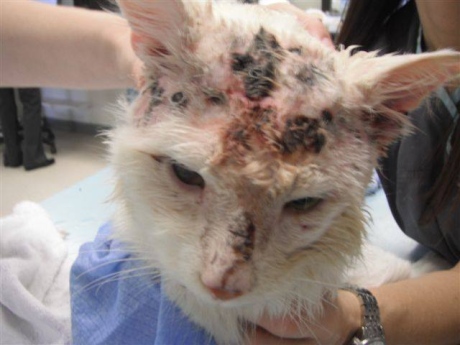 Sarnia, Ontario - The local Humane Society in this Lake Huron city of 72,000 people is reporting that a cat shot 17 times in the head with a BB gun is now in stable condition following emergency surgery to save its life.

The cat will lose an eye as a result. The cat known by the name of Joe fell victim to what is described as a "horrific act of animal cruelty". The humane society has asked the general public for any information to help identify the person(s) responsible for this barbarism.

Joe was in in surgery for three hours where doctors were able to remove 16 of the 17 pellets. The one they cannot remove is lodged in the cat's cheek, but isn't expect to pose any long-term health issues for it. A local Good Samaritan was on his way home from Sunday services when he spotted the injured cat.

Joe is doing fantastic today, and is loving his peronalized blanket that was made for him. Joe needed a bath badly as he was kinda dirty and stinky. He hated the bath but LOVED the blow dryer. He would've stayed under the blow dryer all day long. He is very tired now and is napping, Joe can still have no visitors. Please keep him in your thoughts as he still has a long road ahead of him.

Joe's medical costs are already at $5,000 and may increase. It isn't known at this time if he will need additional surgery, but he will certainly require physical care.

Anyone wishing to make a donation to defray his cost of medical care may phone the Sarnia Humane Society. An X-ray shows 17 pellets lodged in a cat's head. A surgeon was able to remove all but one of the pellets. (Courtesy Sarnia and District Humane Society)
[/caption]