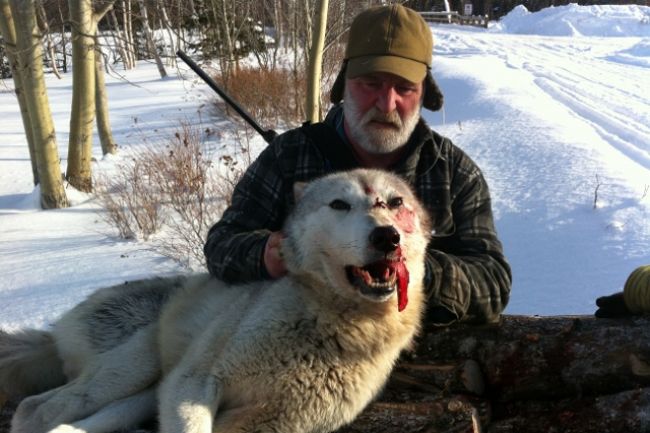 On Wednesday, February 5, 2014, in Port Blandford a wild animal thought to be a wolf was shot and killed by David Hann.

According to Hann, the wild animal kept getting closer to his dog and had been seen in the area for the past couple of months. Hann believed the animal was dangerous and mentioned that it had chased other dogs and neighbors would not let their children or dogs out when it was around.

“I had my dog chained on, and he came after my dog. I had the powersaw going too, full-board, and he (wolf) still kept on coming . . . same as I wasn’t there,” Mann told The Packet.

“He’s been out around people’s doors; they won’t let their children out and they wouldn’t let their dogs out. He came out after a fellow’s dog three or four days ago and he had to run.”

He is certain the animal is a wolf because of his experience with wolves when he worked in the Churchill-Falls area. Initially, the animal was thought to have been a coyote, but further testing by the University of Idaho and the Memorial University of Newfoundland discovered that it was indeed a wolf.

Corner Brook wildlife biologists asked to conduct tests on the animal to see if it had bred with coyotes or had rabies.

Since the 1920s, it had previously been believed that wolves were extinct in the Newfoundland area. Recently sightings of wolves had been reported. Joe Fleming, a resident shot a wolf in 2012. Additionally, in 2009 after DNA testing had been conducted, another coyote was found to have been killed.

On The Web:
Wildlife biologists from Corner Brook are aiming to do testing on a wild animal suspected to be a wolf that was shot near Port Blandford yesterday.
http://www.thepacket.ca/News/Local/2014-02-06/article-3606170/Wild-canine-shot-in-Port-Blandford-believed-to-be-wolf/1

Man Dies at Pearson: Was Trapped Under Snow Plow

Rockin’ Robin Deakin To Return To The Ring, Even After Losing 50 Fights