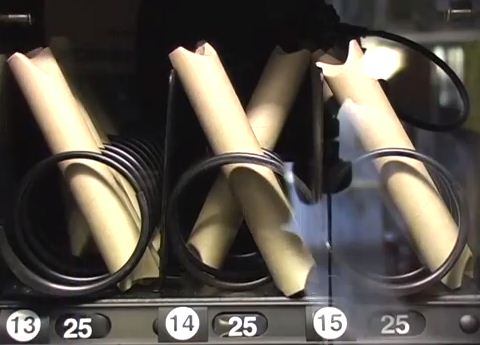 Recently, the Portland Hotel Society installed vending machines throughout Vancouver. These machines aren't carrying snacks or sodas, though. Each machine dispenses brand new crack pipes for 25 cents each. By offering such items, PHS is looking to curb the spread of disease, including HIV, among drug users. Portland Hotel Society is a drug treatment center that operates in various locations in Canada.

The local government of Vancouver isn't necessarily thrilled about the idea. However, PHS says that such machines will help fight disease. Each crack pipe is new and safer than pipes used by many addicts. These pipes are less likely to crack and cut users, leading to a decrease in the spread of illnesses. Since installing the machines, Portland Hotel Society has stuck to its decision, considering it a public safety improvement. The pipes cost the equivalent of 14 pence (Picture: YouTube)
[/caption]

Such a scheme might seem a little excessive to most people. Then again, drug users commonly spread diseases to each other. Some organizations give clean needles to drug users to stop diseases. This particular vending machine solution works in a similar fashion. Still, Vancouver's politicians aren't too happy about the idea and are seeking to get the machines removed as soon as possible.

‘We packaged a crack pipe in polka dots and people were very intrigued by it and wondered what it was,’ Kailin See, the director of the Drug Users Resource Centre, told The Globe and Mail. ‘It was a hit right away.

‘This machine decreases the street value of a pipe. There was a time when pipes were scarce and there was a lot of violence around acquiring a pipe, so we decided to saturate the market.’

With high-quality shatterproof Pyrex pipes now available free or to little cost, crack users no longer have to turn to sharing pipes or buying them off the street.

“Studies have shown that individuals who use crack cocaine on a daily basis face all sorts of threats to their health, one of which is related to the use of substandard or shared pipes,” Dr. M-J Milloy, a research co-ordinator with the B.C. Centre for Excellence in HIV/AIDS, said in a recent interview. “To give them better access to more pipes will be shown to be a good thing. The federal government is opposed to the idea (Picture: YouTube)
[/caption]