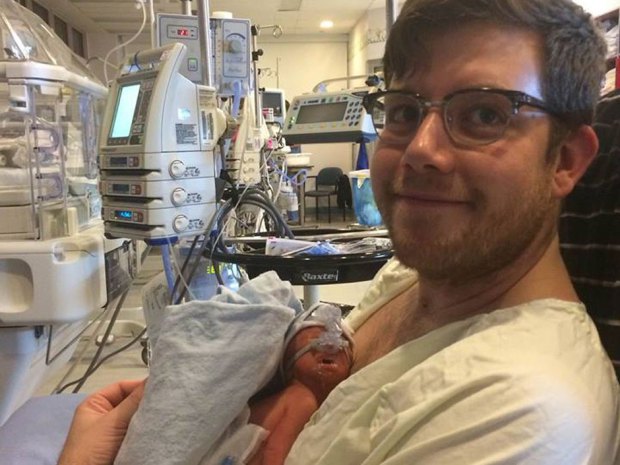 Dylan Benson posted this picture of himself and his newborn son, Iver Cohen Benson, yesterday on Facebook.[/caption]

The delivery of a child, whose mother has been on life support since December, is the source of both pain and happiness for a Victoria man. The new father of Iver Benson lost his wife shortly after the birth of his son. Robyn Benson suffered from a cerebral hemorrhage which caused her to collapse. Mrs. Benson was pronounced brain dead at the hospital. She was five months pregnant at the time she fell victim to the hemorrhage.

The 32-year-old father of the newborn said that he misses his wife; however, his son is beautiful. He posted updates on Facebook about the ordeal. A fund was set up to he lp raise money for the child. The story spread quickly through the internet, and what was originally meant to raise $36,000 quickly raised more than $140,000 for the care of the child.

Dylan, the baby’s father, said the money would be used for Iver’s care and education. He said that some of the money would also be used to obtain a new place to live for the small family of two. The young father was forced to take a leave of absence from work after his wife took ill. He wants to thank everyone who has been helpful during this difficult time. Dylan announced both the birth of his son and his wife’s passing on Sunday.

"It is with a heavy heart but also with extreme proudness that I am posting this update," Dylan Benson wrote on his personal blog on Monday. "On Saturday evening, my beautiful and amazing son, Iver Cohen Benson, was born. Iver is healthy and is the cutest and most precious person I have ever met."

Dylan said that his wife was the strongest person he ever knew. He said that Robyn was so wonderful that he could not put into words how he felt about her.

"I miss Robyn more than words can explain. I could not be more impressed with her strength, and I am so lucky to have known her," he wrote. "She will live on forever within Iver, and in my heart."

Doctors are keeping the baby under their care until he is strong enough to go home with his father.

Benson tells the Globe he’ll draw upon that generosity of those who donated to the online fundraising campaign Baby Iver Fund, which has now raised more than $156,000.

he said he’ll take some time off work and eventually rent a different place that’s more suited to he and Iver and his son’s education. He said he’ll use the money to give Iver the best-possible, stress-free life. “The public needs to know how thankful I am for their support,” he said. “Please, please tell everyone that I am so thankful for the support from everywhere. The messages, the nice comments, the emails, all of that it has helped immensely in getting through this tough time.”

Click here for more information on how you can help baby Iver.

Related Topics:featuredmom on life support baby
Up Next