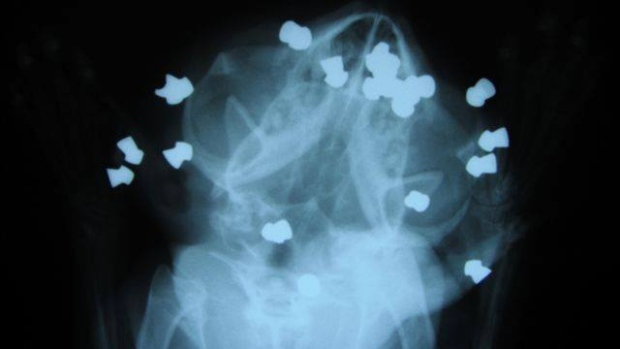 An X-ray shows 17 pellets lodged in a cat's head. A surgeon was able to remove all but one of the pellets. (Courtesy Sarnia and District Humane Society)
[/caption]

Sarnia Police has issued a statement of an arrest made in the shooting case of a cat found in distress and near death in the Brights Grove neighborhood of Sarnia, Lambton County, Ontario, Canada.

Police say that the 19-year-old suspect in custody is being charged with two counts of animal cruelty regarding the assault. Police also recovered drug paraphernalia, including Oxycodone pills, a large number of codeine pill and a small amount of marijuana in the suspect's home during the initial arrest.

As far as 'Joe', the nickname the good people at the Sarnia and District Humane Society chose who were the first on the scene to aid the battered cat, he is miraculously in stable condition and is expected to make a full recovery. Joe will undergo about $5,000 in surgery expenses that communities all over the United States and Canada have offered to chip in for when news of a man spotting him on the side of the road on his way to church surfaced. He was shot 17 times with a pellet gun and has lost an eye. He is currently resting with kind eyes on him and well wishes from the community. Public appeal after cat survives with 17 pellet gun shots in its head
http://www.ctvnews.ca/canada/public-appeal-after-cat-survives-with-17-pellet-gun-shots-in-its-head-1.1669013