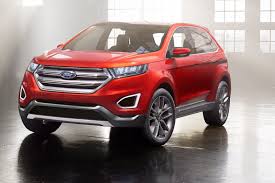 Ford Motor Facility in Oakville to Start Making New Edge Model[/caption]Oakville, Ontario - This Southern Ontario city of 182,000 has received the news that Ford Motor Company has chosen their manufacturing plant in this city as the site for their upcoming Edge sports car. Edge vehicles from this facility will be sold in sixty nations. News of the announcement was predictably greeted warmly by the plant's 2, 8000 workers who may now enjoy job security. The facility’s parts supplier ArcelorMittal Dofasco will also get increased business and by extension job security for its employees.

It is the culmination of a Ford Motor Company's $700 million investment in modernizing the facility which was announced this past fall. When the announcement was made to modernize the facility, Ford stated the goal was to make the plant competitive on a global scale. They weren't kidding as the cars rolling off the assembly line will be sold in dozens of countries and be competing against other global car manufacturers.

“The decision to produce the all-new global Edge in Canada is proof that Canadian manufacturers can compete, and win, globally,” said Dianne Craig, president and CEO, Ford Motor Company of Canada, Ltd. “We’re ready to showcase Oakville Assembly’s commitment to craftmanship and advanced manufacturing to deliver what our global customers want and value -- a high-quality vehicle with class-leading design, fuel efficiency and performance.”

“Oakville is vital to Ford’s global manufacturing system as we prepare to launch more vehicles this year than ever before,” said Joe Hinrichs, Ford president of The Americas. “The Oakville facility will offer world-leading flexibility, enabling us to react quickly and efficiently to shifts in consumer demand here in North America and around the globe.”

Ford has established itself as a world leader in what is called the "global utility vehicle" market. This new growth sector saw a 13% increase in sales in 2013, but Ford performed well above that posting 35% sales growth. Ford also sold 1.2 million sports vehicles last year alone.

On The Web:
FORD SELECTS CANADIAN PLANT TO BUILD ALL-NEW GLOBAL UTILITY VEHICLE FOR EXPORT TO MORE THAN 60 COUNTRIES
http://www.ourwindsor.ca/news-story/4368423-ford-to-build-world-car-edge-in-oakville/

Man Shoots Brother With Cross-Bow, Than Shoots Himself