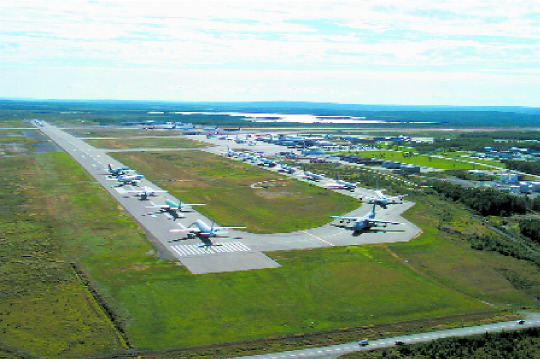 Gander, Newfoundland - An international flight from Chicago O'Hare to London Heathrow was diverted to this small city of 11,000 residents due to an unruly passenger. The man in question had refused to adhere to directives from flight attendant and American Airlines refused to tolerate him any further.

The incident occurred yesterday aboard American Airlines flight 86. Once the plane touched down in Gander, authorities boarded the plane and took the bothersome passenger away. The plane then refueled and resumed the long 4,000 mile flight. It is not clear how much of a delay the diversion caused. The flight left Chicago at 6:00PM CDT and was originally scheduled to land in London at 4:00AM local time. A spokesman from American Airlines confirmed the incident, but offered little by way of details.

Const. Sheldon Walsh says the unruly passenger was allegedly intoxicated, cursing and arguing with other passengers and refusing to stay in his seat.

Walsh did not give the Unruly Passengers name.

Obviously, there is curiosity regarding the passenger, his name, age, and what specific behavior he demonstrated to justify the airline making a costly diversion just to expel him from the flight. A similar incident occurred in January aboard an international flight from Iceland to New York City. However, in that case, the crew resorted to subduing the unruly passenger with tape.

Man Shoots Brother With Cross-Bow, Than Shoots Himself