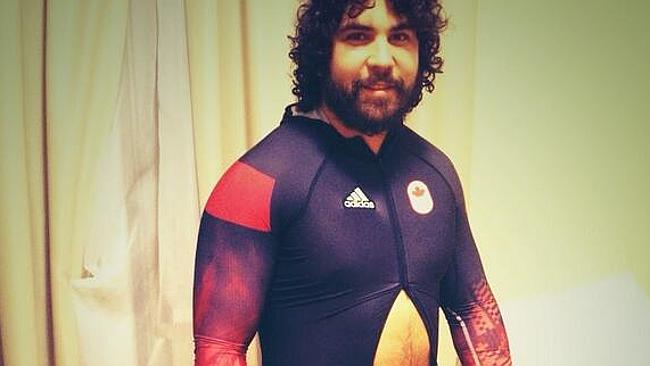 Some may get embarrassed if this happened, Aussie-born Canadian bobsledder Christopher Spring saw the funny side. Picture: Twitter Source: Supplied
[/caption]Bobsledder Wardrobe

One may ask, in relation to a bobsledder, what wardrobe elements are essential to the sport. There are four key elements. The bobsledder's shoes, his body suite, his gloves and his helmet and goggles. All of these elements are important and designed to assist the bobsleddler increase and maintain his speed as well as control of his craft, his bobsled.

The helmut and goggles. With speeds in excess of 40 and sometimes 50 miles per hour, the helmut functions not only as safety gear but also to improve the areo dynamics of the craft. The helmut as well as the goggles become part of the friction fighting elements of the craft.

I tried on my race suit ahead of tomorrow's 2man Olympic race and its a little…er tight. #powerbelly pic.twitter.com/Ws25bERzjV
— Christopher Spring (@BobTeamSpring) February 15, 2014

The running shoes of a bobsledder are just as important as the cleats on a football player and the spikes on a track and field runner. The spikes on a bobsledders shoes enable him to maintain traction and pick up speed as he pushes the bobsled from its running start.

The bobsledder's gloves assist him in maintaing grip during the push and mount stage of the beginning of the run.

The body suite is built for lightness to assist in the speed in the bobsledder's craft and has met with comedic results when the skin tight design of the suits do not match the muscular build of the bobsledder.Bobsledder Wardrobe Malfuction Some may get embarrassed if this happened, Aussie-born Canadian bobsledder Christopher Spring saw the funny side. Picture: Twitter Source: Supplied
[/caption]

12-Year-Old Hockey Player Roughed Up by Referee In Manitoba