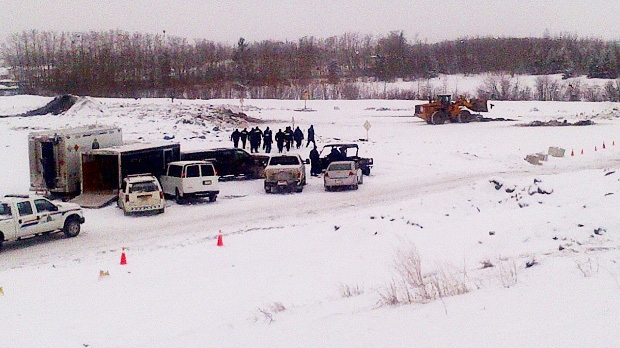 RCMP Find Body Buried in Grande Prairie Waste Facility[/caption]Grande Prairie, Alberta - Royal Canadian Mounted Police (RCMP) in this North West Alberta city of 55,000 appear to have found what they were looking for when they scoured the Aquatera Waste Management facility: human remains. They believe they discovered Courtney Breanna Johnstone, age 26. She is believed to have been murdered and they have already taken her suspected killer into custody.

As of this writing, the identity of the human remains has not been made. They expect to both make a positive id on the body and establish the cause of death from the autopsy early this week. Johnstone had gone missing on January 30. Her suspected killer, Shane Gregory Babitsch, is now facing a charge of first-degree murder. The 21-year-old male is expected in court next month.

The discovery capped a 5-day search that began on February 11. A spokesman for the RCMP detailed the arduous search process at the waste facility.

“What we’re going to do is we’re going to continue to search as long as there’s any reasonable likelihood that we will, that we can, come to a successful resolution there,” said Supt. Ray Noble, officer in charge of the Grande Prairie RCMP detachment.

The investigation was hampered by the extreme cold and snow. There were also hazards to police from medical & industrial waste products. They credited the victim's friends and family for speedily reporting her missing as a key contributor to locating her body.

Johnstone was last seen on Jan. 27 and reported by police to be missing three days later

Much Of Southern Ontario To Get Another 10cm Of Snow Tuesday

Unruly Passenger Eastern Canada: Man Gets Get Off Plane In Newfounland