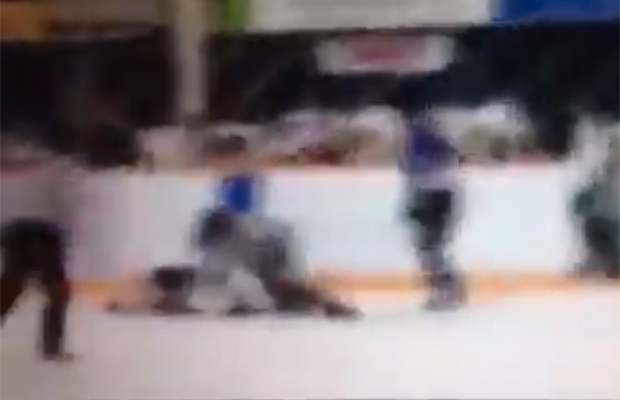 12-Year Old Hurt During Peewee Hockey Game Scuffle In WinnipegPhotograph by: Alex Pieper , YouTube[/caption]A 12-year old Winnipeg hockey player is sporting a sling to support his broken wrist, thanks to being thrown down to the ice by an official attempting to break up a scuffle that occurred at the end of a peewee hockey semifinal game.

Kainen Bell was caught up in the fracas during the final minutes of the Southeast Winter Tribal Days game between played between teams from the Sagkeeng First Nation and the Brokenhead Ojibway First Nation. Bell reported that he momentarily lost consciousness after hitting the ground, then was aided by another player who pulled him off of the ice.

The Brokenhead team was headed to victory, with the score at 4-0 with only moments to go before the game's end when a fight broke out near the Sagkeeng net.

A video recording of the incident shows that Bell and another player began throwing punches at one another until a referee grabbed the youngster from behind, causing him to fall onto the ice with the referee's weight on top of him. Then a spectator ran from the stands to fight with the referee.

At this point, parents throughout the stands were screaming at the officials to get away from their children and to stop manhandling the players. Parents further criticized the referees for not being able to separate the players who were fighting without harming them. Police officials were called to the scene, although no arrests were made. Bell's parents are insisting that the referee be sanctioned and not allowed to officiate at future peewee games.

12-Year-Old Hockey Player Roughed Up by Referee In Manitoba