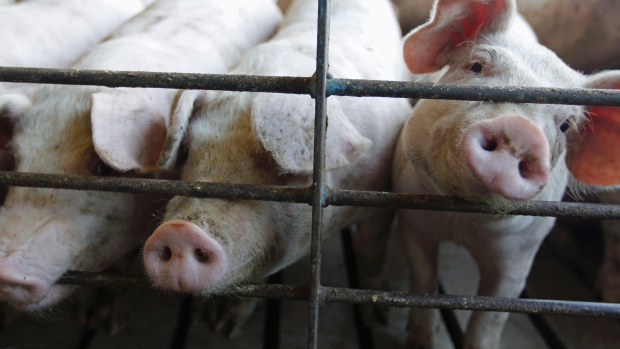 Toronto, Ontario - According to the Canadian Swine Health Board, the agency charged with maintaining swine health, the outbreak of swine infection on farms located in two provinces would have been worse if Canada had not taken swiftly taken safety measures following an outbreak in the United States. An executive for the board claims that Canada was given an early warning when porcine epidemic diarrhea (PED) broke out in pig fames across the USA. The outbreak gave Canada time to take preventative measures which, coupled with ongoing reforms, have blunted the spread of the virus.

"If we didn't have the detailed focus on biosecurity in Canada, within the Canadian industry, I think it's pretty evident that this disease would already have spread right across the country." Canadian Swine Health Board executive director Robert Harding said

The board claims that biosecurity is a major concern in Canada and has prevented a nationwide outbreak of the swine deadly virus. While the virus is not dangerous to humans, it can wreak havoc on pigs. During the US outbreak, millions of piglets died. However, the virus has made an appearance in Canada. The first outbreak occurred in January at a swine farm in Southwestern Ontario. Thus far, 18 farms have reported outbreaks two of which reported outbreaks this past Friday and two this week. The most recent cases were in Manitoba and Prince Edward Island.

Despite the preventative measures, the virus has still infiltrated Canadian farms across the country. Admittedly, the board does not know how that occurred, but there is sufficient interaction between both nations to facilitate the spread. However, given the infectious nature of the virus, it is a wonder that it took several months to make its way across the border.

On The Web:
Steps have slowed spread of deadly pig virus
http://www.mississauga.com/news-story/4370331-steps-have-slowed-spread-of-deadly-pig-virus/

Related Topics:pig virus canada
Up Next