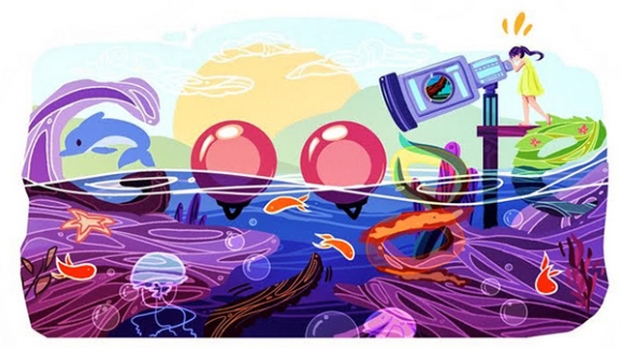 Cindy Tang has won the first "Doodle 4 Google Canada," a national competition that invites budding artists to redesign the Google.ca logo, with her image of a giant sea telescope overlooking a body of water.[/caption]

TORONTO, Ontario, Canada - 17-year-old Cindy Tang of the Dr. Norman Bethune Collegiate Institute in Scarborough, Ontario, won the inaugural edition of the Doodle 4 Google Canada contest with her entry, a vibrant picture depicting a sea telescope looking into the depths of the ocean.

The Doodle 4 Google Canada contest was held to invite artists to redesign the Canadian Google site's logo. Tang was selected among 25 other finalists from different regions of Canada, including Ontario, British Columbia, and Northern Canada. The prize for her winning entry, aptly titled "Sea Telescope," is a $10,000 scholarship, a $10,000 grant for her school, and a laptop computer. Her drawing is also featured alongside images created by more than 70 other finalists at an exhibit in Toronto's Royal Ontario Museum, where the award ceremony was also held.

“We believe it’s important to challenge young Canadians to fire up their imaginations and ignite their interest in science, art and innovation,” Chris O’Neill, Google Canada’s managing director, said in a statement. ”Our hope is that these 25 students, and the thousands across the country who participated, will be the next generation of Canadian talent that can harness the full potential of technology and begin solving the tough problems we face with inventive, imaginative thinking we’ve seen in these doodles.”

Last fall, organizers started the competition by asking students from kindergarten through 12th grade what they would invent if they were given the opportunity, and a draw a picture based on their idea. Tang's drawing answers, "I would invent a telescpe that would show us the depth of the sea." She was joined by four other finals who will each receive a %5,000 scholarship and a laptop computer.

Tang was the finalist for the Ontario region, while four other national finalists received a $5,000 scholarship and a laptop computer.