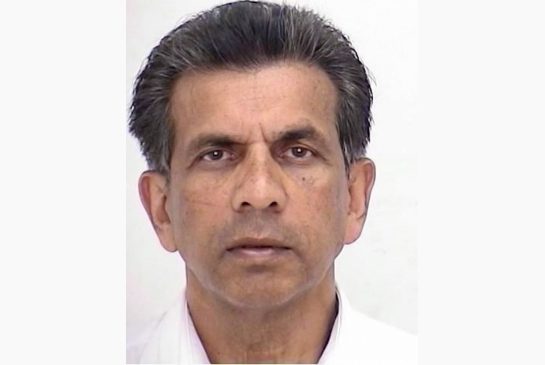 George Doodnaught is shown in a Toronto police handout photo. The anesthesiologist convicted of sexually assaulting 21 sedated women during surgeries has been sentenced to 10 years in prison.
[/caption]TORONTO, Ontario, Canada - Anesthesiologist Dr. George Doodnaught was sentenced to 10 years in prison for sexually assaulting his patients during surgery while they were sedated.

Doodnaught, 65, was convicted of molesting his 21 patients, all female, in November 2013. The incidents in question occured from February 2006 to February 2010 when Doodnaught worked at North York General Hospital. His victims were between the ages of 25 and 75. A judge says that his actions, which were hidden from other medical staff by only a surgical drape, betrayed the deep sense of trust his patients had in him and were “reprehensible in the extreme.” His defense attorney, Brian Greenspan, requested a sentence of eight to 10 years in protective custody, while Crown prosecutors wanted a harsher sentence of 12 to 15 years in prison.

Justice David McCombs said Doodnaught commited the foul acts while patients were conscious but sedated, and consequently manipulated his victims by saying that "they had initiated the sexual contact.”

“The profound psychological impact of the physical violations has been compounded by the victims’ deep feelings of betrayal – that these offences were committed during surgery, by a medical doctor, in an operating room, a place of ultimate vulnerability and trust,” McCombs said in sentencing Doodnaught.

“His conduct did enormous damage and was reprehensible in the extreme.”

During the hearing, most of his victims served as witnesses against Doodnaught. It was a very emotional event, with most of them wiping tears from their eyes as the judge handed down the sentence.

Doctor who assaulted patients during surgeries sentenced to 10 years
http://www.theglobeandmail.com/news/toronto/doctor-who-assaulted-patients-during-surgeries-sentenced-to-10-years/article17079114/

Edmonton man pleads guilty to the stabbing of police dog