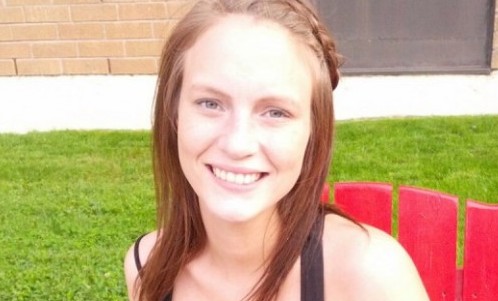 A photo of Loretta Saunders shared on a "Help Find Loretta Fund" GoFundMe.com page.
[/caption]A 26-year old St. Mary's University student who was missing for 14 days has been found dead off one of the routes of the Trans Canada Highway in N.B. Loretta Saunders was last seen alive in mid-February near Cowie Hill Road. She said goodbye to her boyfriend and left him to meet with two individuals interested in subletting her apartment. This pair was later charged with the theft of her automobile, found near Windsor, Ontario last week. Victoria Henneberry and Blake Leggette have been arrested and charged with auto theft.

Saunders, who was set to graduate from the University this spring and was researching her final thesis on aboriginal women who had been murdered, was three months pregnant. Members of the Halifax community responded quickly when Saunders' family requested their help in combing the area for their missing relative and her death is now being treated as a homicide.

Police investigators did not release the cause of death but report that they have specific persons of interest who they expect to charge with homicide later this week. It has not been determined if the couple who have been charged with stealing her car will also be charged with her murder.

Friends of the deceased student, who was Inuit and native to the Labrador region, expressed profound shock and sadness upon learning that she had been murdered. Friends from her hometown expressed the feeling that her death was like throwing a pebble into a pond of water, where the ripples spread out and affect everyone else. Even police officials called the outcome of the search for Saunders extremely tragic.

"We are just small-town girls from Labrador ... and everybody was so supportive and just gave in the search to help find her," said Jean Flowers, a family friend from Hopedale, N.L.

"I just want to thank everybody on behalf of the family because I know they are so appreciative of everything that has been done."

Although Saunders was characterized by those who knew her as a simple, small-town girl, in her young, short life she managed to influence many people and make them care enough about her to join the search.
[caption id="attachment_80317" align="aligncenter" width="545"] THE CANADIAN PRESS FILE PHOTO
Halifax police say Lorretta Saunders' remains have not been located but investigators are making efforts to find her body so it can be returned to her family.[/caption]