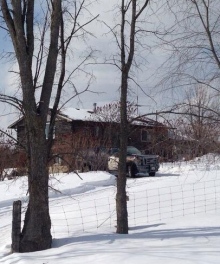 The shooting started at 5 p.m. Eastern time, when the gunman opened fire at six different places in the Tamworth area, including the post office, two houses in the area, the fire station, and two places on County Road 15. The gunman died when the Ontario Provincial Police intervened, and a man and woman were rushed to a hospital with serious but non-fatal wounds. No names or ages have been made public, and it was confirmed that the gunman was not killed by any officers. The OPP has also not offered details about the deaths or injuries, and has said they are not looking for suspects. They will, however, be investigating the causes and circumstances that led to the shooting.

Tamworth native Colleen Kidd reports that a van in her garage was smashed up by repeatedly ramming into it while her garage was open. The garage door of one of her neighbors was also banged up in a similar fashion.

When Kidd called the police, she was told it was due to the events happening in the neighborhood, and to stay inside and not disturb the crime scene.
[caption id="attachment_80369" align="alignright" width="220"] Nuuk Accords to Regulate Arctic Fishing for Canada and Other Nations