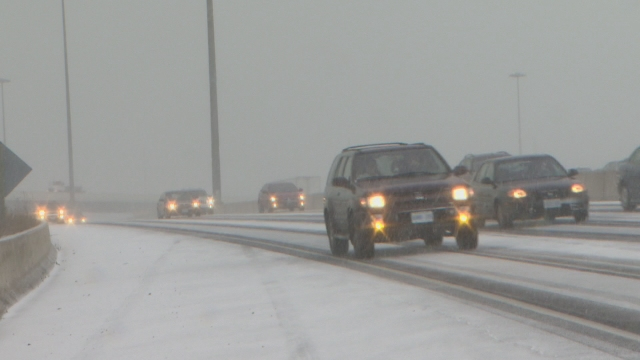 Snow Squall Warning for Toronto and Southern Ontario[/caption]Snow squalls with a wall of snow and sudden whiteout conditions.

A sharp Arctic cold front blasting southeast across the regions has a band of heavy snow flurries and snow squalls associated with it. Most areas may receive a quick 2 to 4 cm of snow, and visibility may suddenly be reduced to near zero in bursts of heavy snow and blowing snow as the cold front moves through. Heavy flurries and snow squalls will move through the Golden Horseshoe between 9.45 and 11.00 AM. As the front moves through.

Driving conditions will be dangerous from the sudden zero visibility in the snow squalls as the front moves through. Motorists should pull over as the snow squall arrives and wait until it passes.

Southwesterly winds over Lake Ontario are generating snow squalls that are affecting areas from near Napanee to Kingston and areas to the northeast. These snow squalls will move east into the Gananoque Mallorytown region over the next few hours.

Southwesterly winds are also generating snow squalls over Lake Erie. These snow squalls will affect Southern Niagara this morning before a cold front sweeps through.

The most significant issue with these snow squalls will be sudden zero visibility in white out conditions from blowing snow and bursts of heavy snow. Local snowfall amounts of 5 to 10 cm are expected.

These snow squalls may have significant impact again on travel on highways 401 and 2 through the regions. Motorists should be prepared for sudden nil visibility in snow and blowing snow, resulting in dangerous driving conditions. Motorists considering travel through the area should allow extra time or plan alternate routes to avoid the snow squall activity.

A cold front moving through the regions today will cause the snow squalls to move southward out of Ontario this afternoon.