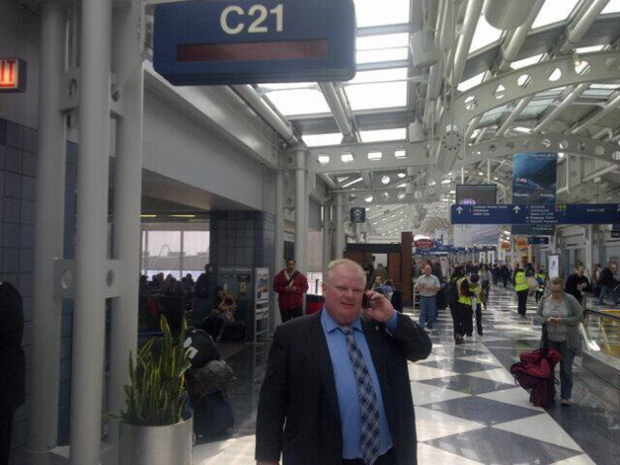 Rob Ford, the mayor of Toronto, is headed to the Oscars, according to a photo posted to his Twitter account on Saturday. In the pic, Ford is standing on a concourse inside O'Hare International Airport chatting on his mobile phone.

The photo caused considerable speculation when it was first posted, as Ford had been unclear as to whether he would appear on any talk shows.

Comedian Jimmy Kimmel has been especially relentless in mocking Ford, labeling the mayor's crowd-parting skills as "Rob Fording" and creating a video making fun of the man's victory jumps during the Sochi Olympics.

Jimmy Kimmel has stated that Ford is an expert at his job, which is mainly "pulling nuggets out of his bag of crazy." Kimmel attempted Ford's method of moving through a crowd and found it "kind of scary."

The buzz got louder when Ford later confirmed he was headed to the Oscars ceremony, although his role, if any, is not known. The mayor told the Toronto Star that he is embracing the chance to represent Toronto on a global stage.

Ford found more immortality on Friday night, when he was represented on a float in the Mardis Gras parade in New Orleans. Rob Ford is flying to Los Angeles for the Oscars and Jimmy Kimmel: reports
http://news.nationalpost.com/2014/03/01/rob-ford-is-heading-to-the-oscars-and-jimmy-kimmel-reports/