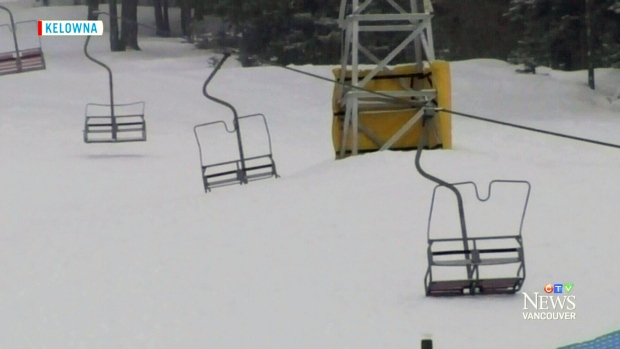 Chairlift Tragedy at Crystal Mountain B.C. Leaves Four Injured, Two Critical[/caption]This past Saturday, 4 people were injured due to a falling chair on the Crystal Mountain Ski Resort ski lift. While 15 people were evacuated from the ski lift unharmed after being stranded for close to 20 minutes, 2 people had minor injuries and the other 2 were rushed to the hospital. (CBC)

Crystal Mountain, which is near Kelowna, Canada and has been in operation since 1967, has been closed as investigators try to determine the cause of the accident. This is the first incident of its kind and resort staff and BC Safety Authority investigators alike are eager to get to the root cause of the issue. (GlobalNews) According to the General Manager, the ski lift has previously only needed to be evacuated a single when the power failed, and there were no injuries.

Due to some malfunction, an empty chair at the West Kelowna ski hill swung wildly and hit one of the towers. This is being targeted as part of the cause for the following accident. The sudden derailment of the empty chair caused a chain reaction and 2 other lift chairs fell 25 feet (7 meters) to the ground, trapping their occupants underneath. "Two were transported by basic life support crew to the hospital and one was transported by helicopter and the fourth was transported by our advanced life support crew to Kelowna General Hospital." Says Joe Puskaric the District Duty Supervisor. (Castanet)

Of the 4 injured victims, 3 of them were employees of the ski resort while the 4th one was a guest. Their ages are ranging between 18 and 35 but no reports has been confirmed as of yet of the sex and approximate age of the victims. The list of broken bones includes; broken ribs, a broken leg, and a dislocated shoulder which will need surgery.

Disabled BC Supply Ship Being Towed to Pearl Harbor