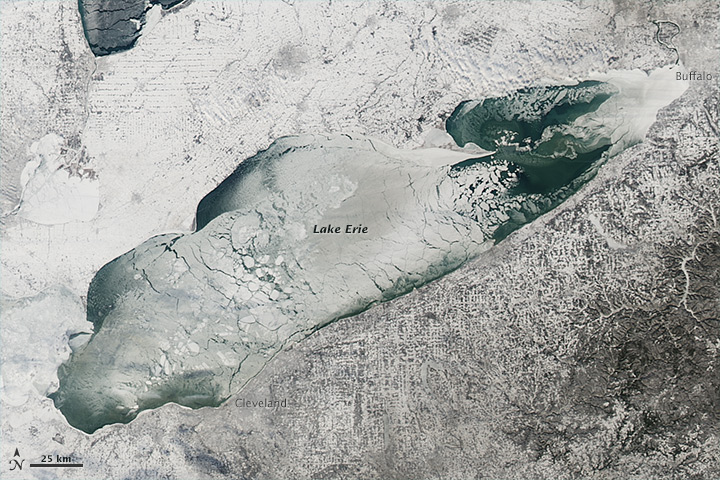 Lake Erie on January 9, 2014
[/caption]Phosphorous from fertilizer used around Lake Erie is creating so much pollution in the water that it has proved deadly to some dogs in addition to causing some swimmers to become ill. Now the International Joint Commission representing interests from both Canada and the United States is calling for new regulations regarding the use of fertilizer around the Great Lake which has been linked to causing the production of algae blooms in such concentration on the water that it is threatening fish, wildlife, tourism and local water supplies.

The IJC is calling for a complete ban on the sale of lawn fertilizers containing phosphorous throughout Ohio and Pennsylvania in the United States as well as Ontario province in Canada. It is also recommended that farmers in the region severely reduce the amount of fertilizer run-off from their lands that eventually dumps into Lake Erie and creates the threatening blankets of algae each and every summer. The IJC is suggesting that crop insurance be connected to a farmer's ability to practice safe fertilizer runoff. The Commission, charged with regulating water usage along the Canadian/U.S. border, is also asking Michigan government officials to take steps to limit phosphorous pollution caused by farmland runoff in that state as well.

Fertilizer manufacturers as well as members of the agricultural community intend to stall any effort to eliminate the use of phosphorous based fertilizer. There already has been legal action taken against the EPA to prevent fertilizer regulation in areas bordering Chesapeake Bay. Although governmental efforts in the 1980s were successful at eliminating algae blooms in Lake Erie, within a decade farm usage of phosphorous-based fertilizers reactivated the problem, which has caused a serious dead zone in the middle of the lake where fish cannot exist. By 2011, algae blooms measured three times larger than any previous amounts.

Niagara Falls Freezes Over for the Second Time this Winter

Ontario Looks to Pass Its Own Invasive Species Act