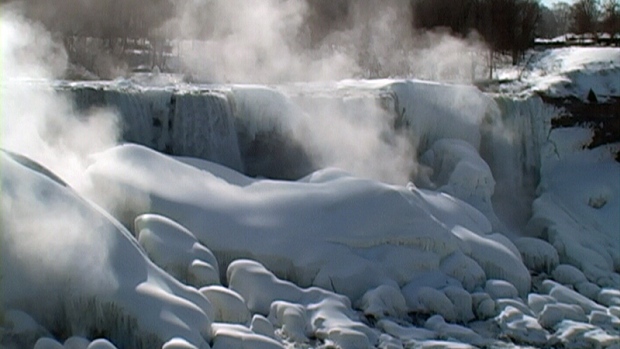 Niagara Falls Freezes Over for the Second Time this Winter
[/caption]Niagara Falls is one of the world's largest waterfalls and an inspiration for romance going back generations. It is estimated that 6 million cubic feet of water pours over the cliffs every minute which only underscores the magnitude of this winter freeze. For the second time this season, the waterfall has frozen over effectively halting much of the water flow.

Nighttime photographs which typically present the marvel of rushing water reflecting beams of light are gone. Now, the light presents a spectacular view of foamy-like ice and snow formations which accumulated at the base of the waterfall as the freezing temperatures slowing began to halt the flow of water.

Needless to say, rushing water usually prevents the buildup of ice during winter, but this current winter has not been an ordinary one.

When illuminated by colorful lights at night, the base of the waterfall resembles a scene that might be expected on one of Jupiter's frozen moons. The top of the waterfall is picturesque in its serenity. Regardless of the weather, the waterfall continues to be breathless and inspiring. The first time it froze over this season was in January as the result of a polar vortex which struck the United States.

----------------------
Source:
Niagara Falls comes to a halt AGAIN: Millions of gallons of cascading water is frozen in bitter temperatures
http://www.dailymail.co.uk/news/article-2572681/Niagara-Falls-comes-frozen-halt-AGAIN-subfreezing-temperatures-freeze-millions-gallons-water-normally-flow-Falls.html