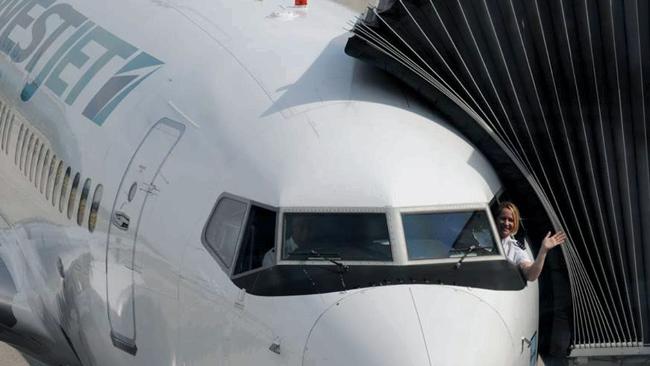 The message, penned on a napkin, chided her for working as an airline pilot instead of being at home raising children.

He explained that it is "motherhood" that brings a woman true honor as opposed to flying aircrafts. He acknowledged his remarks were not politically correct, and declared her career to be mere vanity. He then drew a mother and child as it to indicate what matters most in life.

"David in 12E" also stated that had he been told a "fair lady" would be piloting the airplane he would have opted for a different flight time. Steacy decided to post photographs of the front and back of the napkin on Facebook. The incident occurred after her Calgary to Victoria flight. In her social messaging retort, she opened up by stating that she was pleased to fly him safely to his destination. She followed up by saying that once he heard her, a fair lady, announce herself on the intercom, he could have voluntarily removed himself from the plane. She said this was the most peculiar customer comment she's received in her 17-year career.

Steacy, who lives in Surrey, Canada, posted the photos on her Facebook page along this response: “To @David in 12E on my flight #463 from Calgary to Victoria today. It was my pleasure flying you safely to your destination.

“Thank you for the note you discreetly left me on your seat. You made sure to ask the flight attendants before we left if I had enough hours to be the Captain so safety is important to you, too.

“I have heard many comments from people throughout my 17-year career as a pilot. Most of them positive. Your note is, without a doubt, the funniest. It was a joke, right? RIGHT??

I thought, not. You were more than welcome to deplane when you heard I was a ‘fair lady’.
“You have that right. Funny, we all, us humans, have the same rights in this great free country of ours. Now, back to my most important role, being a mother.”

The response earned her a lot of praise on Twitter.

Westjet spokesman Robert Palmer told news.com.au: “We are enormously proud of the professionalism, skills and expertise of our pilots and we were disappointed to see this note.”

He said the airline doesn’t wish to engage further about the incident, as “to do so only serves to lend credibility to the note, which it doesn’t deserve”.

Who Needs Paper: High-Tech Crapper Does The Washing And The Drying