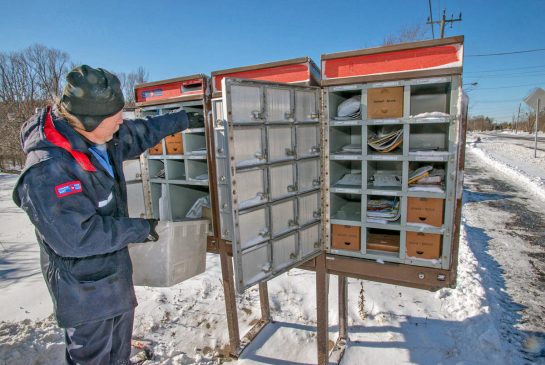 KAZ NOVAK / THE HAMILTON SPECTATOR
Canada Post announced Feb. 20, 2014 that some neighbourhoods in Oakville will be the first to lose home delivery under a new plan to shift to community mailboxes[/caption]Oakville, Ontario - The new community mail boxes which Canada Post will start using during the first wave of a nationwide transition from door-to-door mail delivery were unveiled. The units are made of aluminum and feature larger parcel boxes and flatter mail slots. They have been adapted from prior community mail boxes which were designed primarily for mail. The newer mail boxes are designed primarily for boxes. It is an adaption to the reality that Canada Post, like their counterpart in the United States, is delivering fewer letters while seeing delivery of boxes increase.

As per Jon Hamilton, the spokesman for Canada Post, the future for mail delivery lies in parcels consisting of boxes and less in traditional letters. Phase one of the transition to community mail boxes involves the following 11 cities:

Oakville made a good candidate for the early transition because it already uses community mailboxes in 60% of its addresses. In all, 100,000 addresses will be converted with 25% of them in Oakville.

The new community mailboxes have enough space to hold boxes for clothing apparel and small electronics. Any larger boxes or those requiring signatures for delivery will be delivered at the physical residence. Delivery methods for apartments, condos, and rural addresses will remain unchanged under the new plan. The last cities to make the big switch will be the densely populated metropolises like Montreal and Toronto. This is because cities like this tend to have many small or narrow streets and Canada Post hasn't determined how to physically adapt community mailboxes to these tight spaces. The new community mailboxes support 16 residences with one slot for outgoing mail and two box slots for larger parcels.

Related Topics:Canada Postfeatured
Up Next