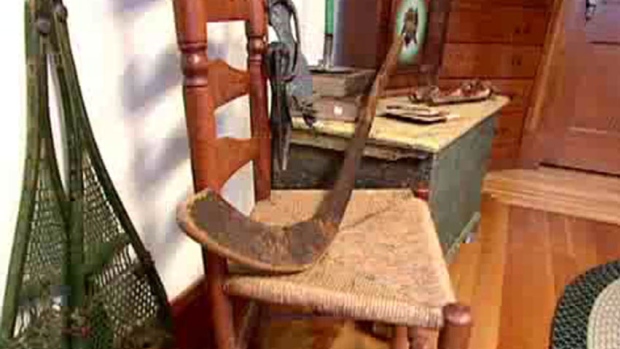 The Moffatt stick was crafted between 1835 and 1838, according to tests done at Mount Allison University in Sackville, N.B.
[/caption]The Oldest Hocky Stick for Sale on eBay

When one thinks of historic artifacts, it's not often in the context of sport equipment. However, the eyes of the world have recently turned to Nova Scotia resident, Mark Presley. He's selling an item known as the world's oldest hockey stick. The stick itself is almost 180 years old. It's appropriate too that it's being sold from within Canada. The sport of hockey has long been associated with the Canadian national identity. Further, the stick itself is made from the wood of a maple tree. The maple leaf is so integrated with Canadian culture that it's even on the national flag.

However, not everyone is happy about the sale. The former owner, George Ferneough, believes he should receive a portion of any profit made on the stick. His reasoning has a lot to do with the fact that the item even exists for sale. He maintains that he's ensured it's safety by displaying it within his barber shop.

The family of the man who initially made the hockey stick has a different view. Presley, the current owner, visited the Moffatt family shortly after buying the stick. The Moffatt's seem to have come away from the meeting with a high opinion of Presley. Joyce Moffatt insists that the stick would never have come to the attention of the world if Presley hadn't been around to recognize the importance of the item.

Hockey stick billed as oldest in the world for sale on eBay
http://www.cbc.ca/news/canada/nova-scotia/hockey-stick-billed-as-oldest-in-the-world-for-sale-on-ebay-1.2563993