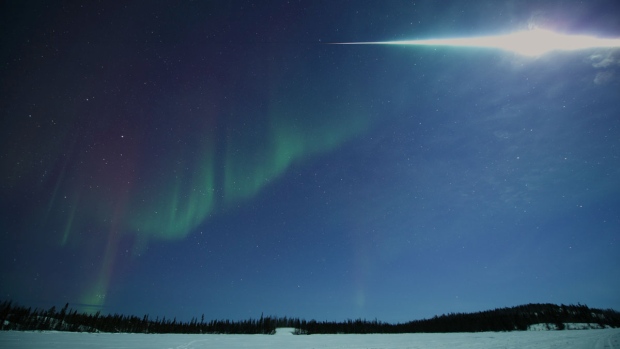 Yuichi Takasaka took this photograph of a fireball exploding in the skies over Yellowknife at around 2 a.m. MT Thursday from Vee Lake during an aurora viewing tour. (Yuichi Takasaka)
[/caption]Residents of the Yellowknife area were awakened in the early hours of Thursday morning by a fireball that exploded in the night sky, showering the area with an extremely bright blue light.

The unusual incident was captured on film and posted on the Spaceweather website by a photographer in the area giving visitors a tour of the famed Aurora Borealis lights. There were reports that the explosion was similar to another middle of the night fireball that lit up the skies over Montreal last fall and caused a similar reaction.

“I was leading Aurora Photography Tour in Yellowknife again this March tonight. We had quite colourful Auroras all night, all of sudden at 02:13 local time, one shooting star started from Western sky and exploded towards North,” photographer Yuichi Takasaka described next to photos posted on spaceweathergallery.com. “It got so bright that I had to close my eyes like someone used electric flash in front of me. A few minutes later, we could hear the huge explosion from the direction of the fireball fell. What an exciting night!!!”

Experts say that the fireball was actually an exploding meteor that luckily caused no damage to people or property in Yellowknife. A scientist at London, Ontario's Western University who examined the photograph taken of the incident reports that the resulting fireball measured approximately one metre in overall size. He estimated that the explosion was a reaction caused by the meteor's having entered Earth's atmosphere. But the size of the meteor combined with the explosion that resulted did not generate enough force to create any noticeable damage.

Cases of exploding fireballs in the sky large enough to be witnessed by observers on Earth are very rare, occurring only once of year at most.

The last exploding fireball captured over Montreal happened last November and created much more of a disturbance, being large enough to create a sonic boom that was heard for miles around and enough energy upon exploding that homes in the area actually shook. The largest meteor explosion to date, however, happened over the Ural Mountains in Russia in 2013. A meteor weighing 10 tons in size created a fireball that injured 1,000 people and carried the force of an atomic bomb, causing thousands of windows in homes and businesses to shatter after the explosion released a gigantic sonic boom.

A fireball was also spotted in Iowa in December. At the time, experts couldn’t determine whether it was caused by a meteor or space debris.

“If it was a meteor it was probably a pretty good-sized one to be as bright as it was,” Richard Miles, with the Science Center of Iowa, told WHOtv. “It could also be some space debris. Anything that goes through our atmosphere from outer space is going to be going at pretty intense speeds and that’s going to cause a lot of friction, cause a lot of heat, and that’s what causes the glowing that you see as a meteorite or debris burning up in the atmosphere.” On Monday morning a fireball was spotted streaking across the Calgary sky in this 2012 file photo. A fireball exploded and lit up the skies over Yellowknife early Thursday morning, but was not believed to have caused any damage.
[/caption]