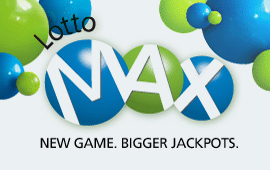 
Once again, there was no $50 million winner in last nights Lotto Max draw.

8 Maxmillions ($1 million each) were won in last night's Lotto Max draw thanks to selections sold in Quebec, in British Columbia, in the Prairies and in Ontario.

With Lotto Max, any amount over the $50 million jackpot is divided into $1 million prizes called Maxmillions. For each Maxmillions, an additional selection of 7 numbers between 1 and 49 is drawn. These selections are not decomposable and prizes may be shared by winners.

The Friday, March 14th draw will therefore offer total prizes worth about $100 million, including the $50 million jackpot and approximately 50 $1 million dollar prizes.

Below are last nights numbers.