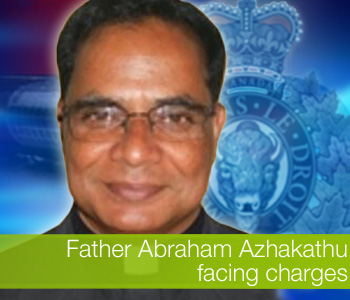 Manning Priest charged after minor reported incidents of sexual assault to RCMP.[/caption]Manning, Alberta - For the past two decades, the Catholic Church has been fighting an ongoing sex abuse scandal that has affected children from as far north as Ireland across the Americas and Europe. It has bedeviled the tenures of Popes John Paul II, Pope Benedict XVI, and now includes Pope Francis.

Now, the Royal Canadian Mounted Police (RCMP) have arrested Father Abraham Azhakathu, age 59 for assaults that are reported to have occurred last year. Perhaps that is the most troubling aspect of the charges is that they are not decades old issues that, while serious, are not affecting new victims, but rather new abuses. The victim came forward to inform the Mounties which subsequently took the priest into custody on Sunday. It is not the sort of news that would be expected from this quiet town of roughly 1,200 residents.

Father Azhakathu was scheduled to appear in Peace River Provincial Court on Monday. He was released on bail under the condition that he not be alone with any minor under the age of 16. It is reported that at the time the sexual abuse occurred, the priest was practicing in the local parish. Police are withholding the name, age, and sex of the victim to protect the child. It isn't known what type of evidence the RCMP has assembled in the case, but the investigation is still ongoing. Neither has the parish issued any statement in regards to the incident or in defense of the priest.