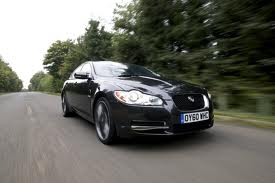 Ottawa Man Arrested After Clocking 190 km/h, Has Car Impounded[/caption]Highway 401, Ottawa, Ontario - It seems that 24-year-old Khalil Kanaan can truly relate the 1980s Sammy Hagar classic "I Can't Drive 55" with emphasis on the lyrics "Go on and lock me up for one-twenty-five...take my license all that jive... I... can't... drive...55!" On Friday police cited him for doing 190 km/h (~118 mph) in a 100 km/h (~62 mph) speed zone. His speed demon antics occurred on Township's Deseronto Road. However, unlike the Sammy Hagar song, it was his car that got locked up and not him.

Kanaan was driving a black 2010 Jaguar and truly cannot be blamed for driving fast as the Jaguar does not fare well driving at moderate limits. It not only designed to drive fast, but it needs to do so for proper maintenance.

Albeit, it is unlikely any argument based on that fact with sway a judge. He'll have to wait seven days to get both his license and car back, but that is the least of his troubles. He was charged with stunt driving which in Canada means he was going at least 50 km/h above the speed limit. On May 8, he'll appear in Napanee Court and make his case before the judge. If found guilty of "stunt driving", he faces a fine of between $2,000 and $10,000 along with a possible two-year suspension of his license. Given the evidence against him, he is well-advised to get a lawyer. The incident occurred at 4:18AM local time Friday morning.