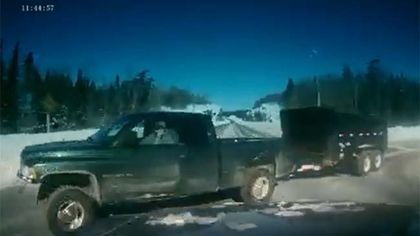 Distracted Driving Video Goes Viral, Manitoba Man Now Charged[/caption]Initially charged with failing to yield to traffic when he pulled out in front of Ralph Ireland of Sioux Lookout, Ontario causing a bone jarring accident. Since then police have viewed a video shot by Mr Ireland's dashboard camera and have added a distracted driver charge to his citation.

Ontario Provincial Police were tipped off to the distracted driving charge after the dashboard video was uploaded to the internet and went viral. The video clearly shows Mr Lord holding something up to his left ear while driving with his right.

Ireland says he is glad neither he or his wife were badly injured and adds had he not been able to stop as soon as he did everyone involved could suffered major injuries or worse. Lord, who was lucky to not incur injury during the incident, was not so lucky when the video was reviewed by the OPP.

Check out the video below.

Video captures hippo saving a gnu from a crocodile