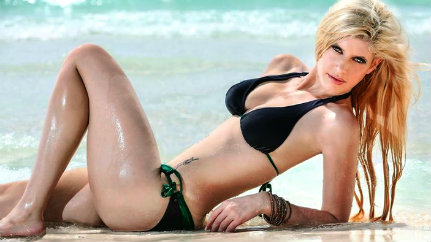 Rather than going down the typical route and getting a part time job, a recently divorced mother turned to Playboy to support her family. Some people might find this unusual, but she seems to on the path to success.

After her husband abruptly left leaving Crystal Brooke with a horse breeding business and a one year old son, Crystal started looking for new opportunities. "I just kind of reinvented myself," she said sitting behind her computer as she entered Playboy's Miss Social contest, a contest for bikini and lingerie shots, along with thousands of other women.

Before long, Crystal also began setting up accounts on Twitter, Facebook and Instagram which brought attention from casting agents. This attention soon lead to Crystal being flown to Los Angeles to take part in an episode of the television show Millionaire Matchmaker.

On top of successfully landing a role on television, Crystal found out two months later that she had won Playboy's Miss Social contest. By winning the title of Miss Social, Crystal not only became the second Canadian to win, but she also gained the exposure she needed.

Her newly acquired fame gave her the opportunity to go to a photo shoot at the Playboy Mansion as well as getting a role on the television series Fargo. Crystal believes that if she can win and get work at thirty-two years old, then anybody can. References:
Alberta mom on road to success with Playboy

BCIT Student in Burnaby Confirmed To Have Measles UPDATE

PS4 Prices In Canada To Be Increased By $50