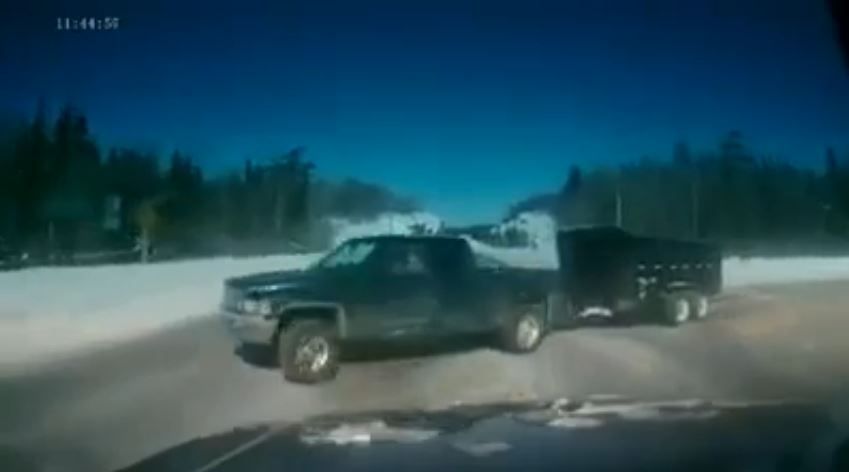 Kenora, Ontario - A video taken from the camera mounted inside a pickup truck captured a sudden accident that occurred on March 1 as Ralph and Ifka Ireland were making the 235 km (146 mile) ride home to Sioux Lookout, Manitoba. The couple was quietly listening to music as they drove westbound on Highway 17. As they approached a T-intersection, the driver of a green pickup truck arrived at the stop sign and pulled out in front of them. Mr. Ireland had only enough time to hit the brakes and take the edge off his speed as he plowed into driver's side of the truck. Both Mr. and Mrs. Ireland were transported to a hospital, but their injuries were not life-threatening. The driver of the vehicle they struck, Christopher Lord, suffered minor injuries that were treated at the scene of the accident.

After the incident, the Irelands uploaded their video to the internet where it went viral. The Ontario Provincial Police (OPP) said they would use the video in their ongoing investigation and that they did. The OPP has now formally charged Lord, age 36, with one count of distracted driving for using a handheld device while driving his truck. He was also cited for failure to yield. It should be noted that the OPP are cracking down hard on distracted driving since it leads to more deaths that drunk driving or reckless driving. New fines for distracted driving are set to take effect on the March 18.

Related Topics:Manitoba man charged with distracted drivingviral video
Up Next