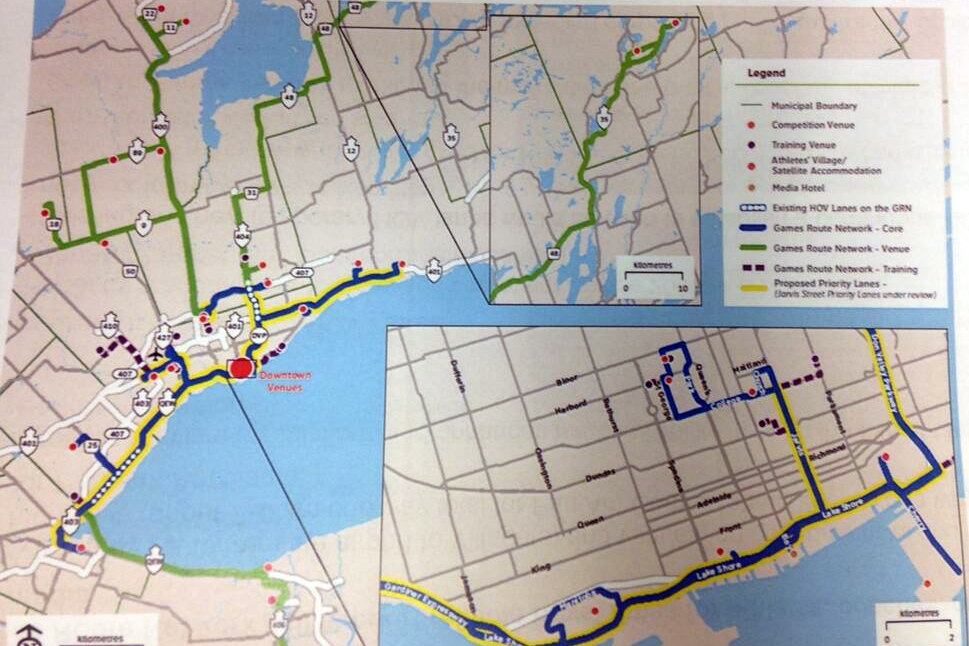 A map of proposed high-occupancy vehicle (HOV) lanes for the Pan Am Games. CITYNEWS/Amanda Ferguson.[/caption]

According to an article recently published by the Toronto Sun, officials representing the city of Toronto are making extensive plans ahead of the upcoming 2015 Pan Am Games.

For example, some 150 km of High Occupancy Vehicle (HOV) lanes are being planned in order to accommodate visiting athletes, coaching staff, and game officials. Also in the pipe line are plans to build more structures to facilitate pedestrian activities such as jogging and walking, as well as new lanes for cyclists. Finally, there will also apparently be a whole host of restrictions on parking in the city. This new wave of potentially repressive measures will also be accompanied by an initiative to reduce traffic by some 20 percent.

Critics of these proposed measures, such as Rod Jackson, say they have a great deal to complain about. Jackson issued the following statement to reporters over the weekend: “The whole thing worries me that they don’t have a grip on this. They say there will be an increase of 250,000 people visiting the city of Toronto during the Pan Am Games, then in the same breath, tell us there’s going to be a 20% reduction in traffic. It’s frankly absurd that they believe that traffic is going to decrease during the Pan Am Games. I just don’t see it happening.”

While these proposed HOV lanes will be made available for carpoolers and city transit vehicles, it remains unclear just how, or if, this proposal will be carried out.

Legally Blind Woman to Run 885 KM Bruce Trail in Ontario: How You Can Help