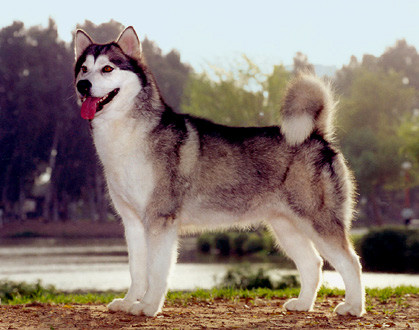 The Alaskan Malamute is a generally large breed of domestic dog (Canis lupus familiaris) originally bred for use hauling heavy freight because of their strength and endurance, and later an Alaskan sled dog. They are similar to other arctic breeds, like the Canadian Eskimo Dog, the Siberian Husky and the Samoyed. (Wikipedia)[/caption]

A community is in mourning today after the dog mauling death of a seven-year-old girl in Oakbank, Manitoba.

According to CBC, the dogs were familiar to the young victim.

The victim was visiting the home of a family friend when their two Alaskan malemute dogs attacked her. No one witnessed the assault.

The attack occurred around 3PM on Sunday, March 16th. The victim was taken to the Children’s Hospital in Winnipeg, where she was pronounced dead.

The dogs, named Shadow and Bear, are currently in the custody of the RCMP. They remain alive, but their fate is yet to be determined. The RCMP has not released any further details concerning the state of the dogs or why the attack might have occurred.

The passing of the young victim is felt by the entire town of Oakbank. Described as "bright and inquisitive," her death has shaken her community. Her elementary school has brought in grief counselors today to console any schoolmates of the victim who are struggling with her unusual passing.

While the town of Oakbank is still coping with the tragedy, the Winnipeg Humane Society is urging people to learn from this tragedy.

"Any large dog — be it a collie or a golden retriever — and young people, they have to be monitored," the CEO of the Winnipeg Humane Society, Bill McDonald, stressed to National Newswatch. "When you've got a seven-year-old [who's significantly smaller than a dog] that's mad, these are the tragic results."